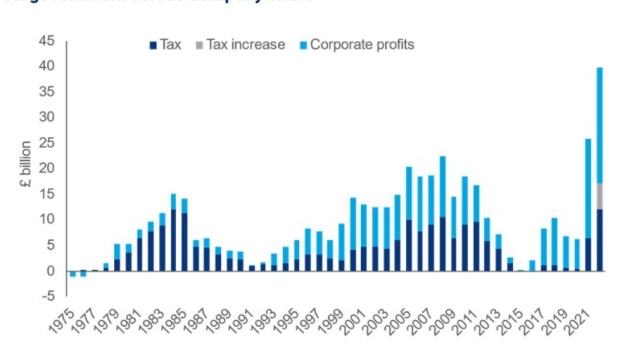 Mobile offshore drilling units stand in the Port of Cromarty Firth in Cromarty, U.K., on Wednesday, March 22, 2017. Even as oil production declined in the North Sea over the last 15 years, economic activity has been buoyed by offshore windmills. , Bloomberg

(Bloomberg) -- The UK Treasury is set to collect record revenue from oil and gas this year, with or without a windfall tax.

Before the government imposed a new North Sea levy on Thursday, the industry was set to deliver £28 billion of corporate profits in 2022, with the state collecting £12 billion in taxes, according to consultant Wood Mackenzie Ltd.

“That would mark the best returns –- for both industry and government –- since the North Sea’s inception, by some distance,” Wood Mackenzie said. The new windfall tax should add about £5 billion to state revenue this year and next, according to the Treasury.

The UK government announced on Thursday that it will impose a 25% windfall tax on North Sea producers, bowing to mounting pressure to support Britons facing a record squeeze on living standards. While the measure includes tax relief on new investment in oil and gas extraction, shares of many UK-focused companies dropped after the decision.

“The industry won’t like it but it’s worth pointing out that no-one –- industry or government –- was anticipating over $100 a barrel Brent in their planning scenarios,” said Neivan Boroujerdi, Wood Mackenzie’s research director for North Sea upstream.  “Corporate profits will still be higher than what would have been anticipated six months ago.”

The timeframe set by the government could be enough for some discoveries that are currently awaiting the final investment decision to be developed with the bulk of costs receiving this tax relief, according to Wood Mackenzie.