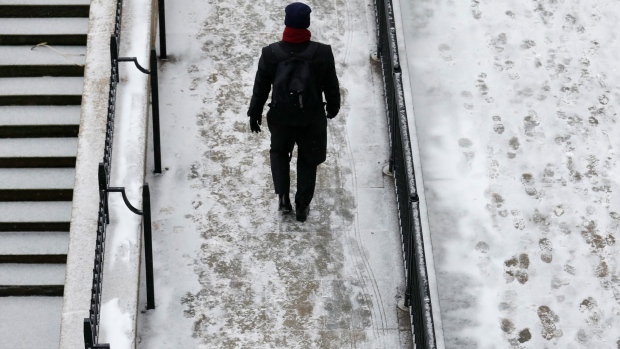 A commuter walks in the snow in London, U.K., on Thursday, March 1, 2018. The freezing weather entrenched across much of Europe is stretching Britain's supply of natural gas with fresh snowfall forecast for much of the country. Photographer: Luke MacGregor/Bloomberg , Bloomberg

(Bloomberg) -- Freezing temperatures and a blanket of snow are poised to hit the UK in the next few days, boosting energy demand just as output from the nation’s fleet of wind parks is slumping.

The Met Office issued yellow severe weather warnings for ice and snow for parts of Scotland, Northern Ireland, Wales and the east coast of the UK for Wednesday and Thursday. Temperatures will drop as low as -10 Celsius (14 Fahrenheit) by the end of the week, the forecaster said.

The frigid weather will severely test Britain’s power and gas infrastructure as the nation enters the coldest months with the smallest margin of back-up electricity supplies in seven years. The rest of northwest Europe is in a tight spot too, with prolonged nuclear outages in France and Sweden curbing stable output at a time when it is most needed.

“We got a situation where we got colder air already moving in across the UK affecting northern Scotland, which is subject to snow and ice warnings, and over the next 24 hours that pool of cold air will extend across all of the UK,” said Met Office spokesman Grahame Madge.

A cold pattern for the UK will at least stay until next week, Madge said, but the exact time frame is subject to debate at this stage. “Some models are showing a strong signal for continuation for this cold,” he added.

Power prices for tomorrow jumped 18% to £364.21 per megawatt-hour, the highest since Aug. 31 in an auction. UK next-month gas futures jumped as much as 4.5% on Wednesday to the highest in almost a week.

Output from the nation’s wind turbines will gradually drop to just above 500 megawatts on Saturday, according to a Bloomberg Model. That compares with more than 7,000 megawatts on Wednesday morning. The fleet has become a vital source of electricity for the nation as old plants burning fossil fuel are decommissioned.

Widespread colder-than-normal temperatures are also forecast from the far north of Scandinavia and into continental Europe, Maxar Technologies Inc. said in a report. Temperatures in Norway, where houses still mainly use electricity for heating, are poised to drop to -20 Celsius next week, Maxar said.

The severe cold spell is a sharp reversal from the milder-than-normal autumn, which allowed utilities to refill gas stores, with European levels currently 91% full and Germany 96% full.

Southern Europe will escape the cold weather, at least for now. Temperatures in Madrid are even expected to reach 5.8 Celsius above normal on Tuesday next week.