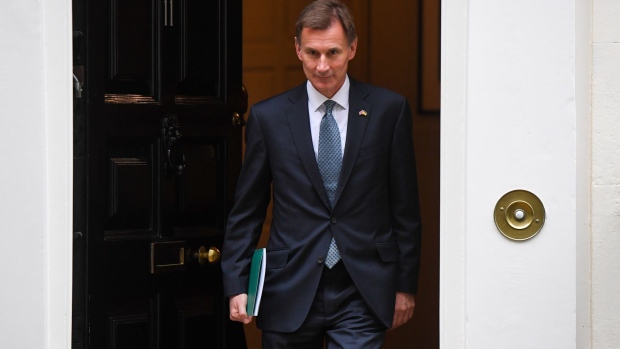 (Bloomberg) -- The UK set out a package of financial services reforms that cuts across dozens of areas but fell short of the ‘Big Bang’ that politicians were promising earlier this year and is unlikely to deliver the dramatic reshaping that some Brexit supporters envisioned.

Dubbed the ‘Edinburgh Reforms,’ the measures include relaxing ring-fencing capital rules to lighten the burden on smaller banks and plans to replace EU regulation covering areas such as disclosure for financial products, according to the Treasury. The government also said it will overhaul “overbearing EU rules which put companies off listing in the UK.”

The changes are a far cry from the dramatic reforms in the 1980s that made London a global financial center and the far-reaching changes mooted when Liz Truss was prime minister. Many of the reforms from that helter-skelter period have been shelved, along with the phrase Big Bang 2, a tacit recognition of the fact that short-term changes will be relatively limited due to their complexity and opposition from critics.

“This is not about deregulation,” Chris Hayward, policy chair for the City of London, said on Bloomberg Television, who welcomed the changes while noting they much more marginal compared to the Big Bang of the 1980s.

As part of the changes to ring-fencing — which requires banking groups to separate their retail banking services from their investment and international banking activities — the Treasury will consult on raising the threshold at which the ring-fencing regime applies to £35 billion ($42.9 billion) of retail deposits, up £10 billion.

The UK also said it would look to replace EU-era rules around the regulation of short selling. The new standalone regime will be “tailored to the needs of UK markets, companies and investors,” according to a Treasury document.

“Leaving the EU gives us a golden opportunity,” Chancellor of the Exchequer Jeremy Hunt said in a statement, announcing more than 30 measures. “We are delivering an agile, proportionate and home-grown regulatory regime which will unlock investment across our economy.”

Other reforms announced include:

The British government is trying to take advantage of regulatory opportunities from Brexit, seeking to change rules to free up capital markets and attract business to the City of London.

“It’s a competitive and international world out there and important we make most of our opportunities,” City Minister Andrew Griffith said in a Bloomberg Television interview Friday. The UK isn’t looking to deregulate but wants to have a “competitive” rulebook.

“This is a well-timed and wide-ranging reform proposal,” said Sidika Ulker, financial regulatory counsel at Ashurst. “It is surprising that it has taken the Treasury six years to deliver on low hanging benefits in the post Brexit era.”

The recent attempts to change City rules have at times stoked controversy, such as a proposed new intervention power over regulators which was dropped by Griffith. The more technical scope of the ‘Edinburgh Reforms’ is a sign of the leading role the UK played in designing much of the EU’s financial services regulations, meaning there’s little scope for immediate change.

“It is important for people not to overplay this - there is no sense of any move back to a pre-financial crisis world,” said Jonathan Herbst, global head of financial services regulation at Norton Rose Fulbright. “Most of the UK regulatory regime reflects either international commitments or policy developed over many years to reflect the lessons of experience. So, the talk of a Big Bang 2 may well be overdone.”

--With assistance from Anna Edwards, Lizzy Burden and Ellen Milligan.