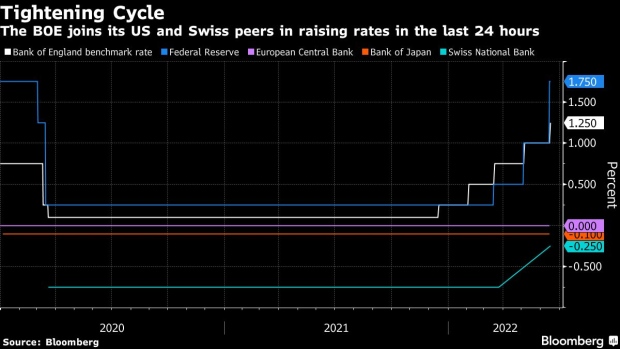 A cluster of one pound sterling coins stand on top of five, ten and twenty pound banknotes in this arranged photograph in London, U.K., on Wednesday, Oct. 14, 2020. Pound traders are remarkably nonchalant even as U.K. Prime Minister Boris Johnson's self-imposed deadline of Oct. 15 to get a trade deal with the European Union looms large. Photographer: Hollie Adams/Bloomberg , Bloomberg

(Bloomberg) -- The UK government should worry about the 10% plunge in the value of the pound this year because it is making the cost-of-living crisis even worse, a senior member of Parliament said.

Mel Stride, a former Treasury minister who leads the Treasury Committee in the House of Commons, said sterling’s move is “is something we should be concerned about” and that “the most worrying thing is the cost-push inflation on imports.”

The comments suggest the mood among policymakers about the currency may be shifting from indifference to alarm. A weaker exchange rate tends to push up inflation by adding to the cost of imports, tightening the squeeze on consumer spending power.

The pound has suffered this year as the US Federal Reserve pulled ahead of the Bank of England in tightening monetary policy to curb a global surge in inflation. The decline also reflects a fall in trade following the pandemic and Britain’s departure from the European Union.

The impact has been most obvious on fuel prices because oil is priced in dollars. Pump prices are higher today, with oil below $120 a barrel, than they were in 2008 when oil peaked at over $140 a barrel.

Most senior officials have been silent about the currency. But a few are starting to speak publicly about it.

Catherine Mann, one of three Bank of England ratesetters who voted for a half point increase in interest rates last week, said on Monday that the BOE should respond to the strengthening dollar with “robust” rate rises. That would reduce “the risk that domestic inflation is boosted by inflation imported via a sterling depreciation,” she said.

Stride welcomed Mann’s observation and pointed out that last week’s rate rise was significantly smaller than the three quarter rate increase in the US the previous day.

In a piece for the Financial Times on Monday, Nicholas Macpherson, a former top civil servant at the Treasury, wrote that a weak pound “increases the cost of living” and it might be “time to embrace sound money” again.

BOE Chief Economist Huw Pill said on Tuesday that raising rates to prop up the pound would be a “distraction” since the central bank does “not have an exchange rate target.”

Stride was speaking as he unveiled a specialist sub-committee to ensure the government does not exercise undue influence over financial regulators.

The new group will help the main committee “hold to account” the Treasury over the direction of laws that will replace the European Union framework currently used to govern UK financial regulation.

The committee warned last month against any pressure to “inappropriately water down” regulations after the government proposed giving regulators a secondary objective to consider international competitiveness and economic growth when setting policy.

The specialist sub-committee will be made up of industry experts, regulators and politicians. It will have an unlimited budget to call on external experts, Stride said.