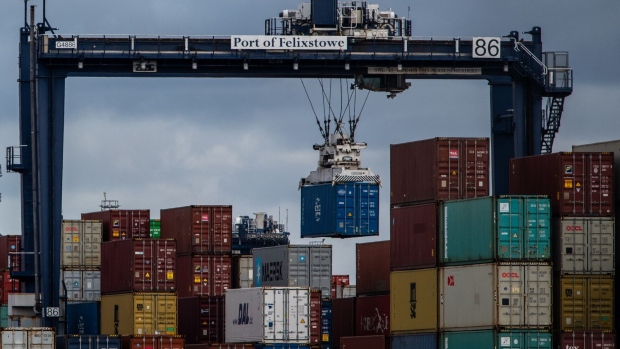 A gantry crane lifts a container on the dockside during the first day of the second-round of strike action by Unite union members and dockworkers at the Port of Felixstowe in Felixstowe, UK, on Tuesday, Sept. 27, 2022. Dock workers at Felixstowe, Britain's largest container port, rejected a pay deal imposed by management, that paved the way for this new round of industrial action and disruption to vital trade flows. Photographer: Chris J. Ratcliffe/Bloomberg , Bloomberg

(Bloomberg) -- The UK will sign its third pact with a US state in the absence of a bilateral free trade agreement, as it seeks to bolster its economic ties overseas after its departure from the European Union.

UK Trade minister Greg Hands will sign a memorandum of understanding aimed at boosting trade and investment with South Carolina, according to a UK government statement on Wednesday. He will also visit Utah and California in hope of similar pacts being agreed to in the near future.

The UK has been rattling off mini pacts with individual states because a wider trade deal with the US — once declared the prize of Brexit — isn’t anywhere close to being agreed three years on from its formal split from the bloc.

While the UK has rolled over a number of deals which mirror the trading arrangements it had with countries while it was an EU member, new deals negotiated from scratch have been few and far between.

One of those it has signed — with Australia — has been widely criticized including by former government ministers as a poorly negotiated agreement.

The UK has now dropped its aim to sign-off on a trade agreement with India by Diwali in October, which has now passed — long promised by former premier Boris Johnson — preferring to get the deal right rather than rush it. That was one of the main criticisms lodged by former Environment Secretary George Eustice against the government’s approach to the Australia deal.

Memorandums of understanding with US states “can cover areas vital to the UK, from tech and renewable energy to financial and professional services,” Hands said in the statement. “We’re engaging with the US at every level — federal, state and local — to increase opportunities for UK businesses.”

The UK is facing a prolonged recession, with the Office for Budget Responsibility forecasting that Brexit will reduce UK GDP by 4% over the longer term. Analysis by Bloomberg Economics shows the UK lagged the trade performance of other big nations before the pandemic — and has failed to fully share in the rebound since then.

Total trade in goods and services between the UK and US has risen by nearly 15% in the last year.