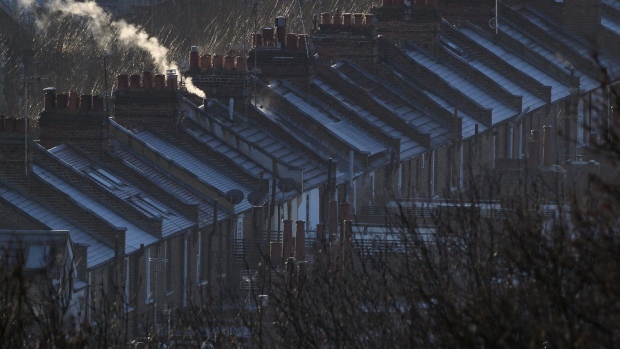 LONDON, ENGLAND - JANUARY 06: Steam and smoke is seen rising from the chimneys and central heating vents of houses on January 06, 2022 in London, England. Last weekend, a group of 20 Conservative MPs wrote a public letter calling for a cut in environmental levies and the removal of energy taxes, following a steady rise in wholesale gas prices. The Labour party has also called for a suspension of VAT on fuel bills for the winter. UK households face a further rise in home energy prices when the price cap is likely raised in April. (Photo by Leon Neal/Getty Images) Photographer: Leon Neal/Getty Images Europe , Photographer: Leon Neal/Getty Images Europe

(Bloomberg) -- Home REIT Plc is facing calls to replace its leadership team from an activist shareholder in the wake of a short seller attack last month.

The Boatman Capital Research published an open letter on Monday calling for members of the board of embattled UK social housing landlord to resign. In the letter, which was addressed to Home REIT director Simon Moore, Boatman detailed a string of concerns including allegations the landlord failed to conduct sufficient due diligence on some of its tenants, didn’t make appropriate disclosures and inflated the value of its property portfolio.

A representative for Home REIT did not respond to an emailed request for comment.

Home REIT delayed publication of its earnings and its shares have fallen more than 30% since Viceroy Research published a report last month that detailed concerns about the financial health and governance of some of the landlord’s key tenants. The short seller also criticized the company’s accounting methods and the fee structure of its external management team. Home REIT dismissed the report as baseless and misleading in a detailed rebuttal of the allegations last week.

The Boatman Capital said Home REIT’s rebuttal to that report revealed “substantive areas” where the landlord had been short in its disclosure and that it needed to change its leadership.

The activist said it has no association with Viceroy but that entities related to Boatman hold shares in Home REIT and it may consider making a larger investment. Boatman would also consider engaging with other shareholders to force change if it is not forthcoming.

The Boatman Capital is run by David Robertson and has previously waged campaigns against companies including Babcock International Group Plc.

Home REIT, which floated in 2020, and is managed by investment boutique Alvarium Investments, says it aims to alleviate homelessness in the UK, while also generating inflation-protected income and capital returns. It does this by buying up property which is then rented out on leases of more than 20 years to charities and other organizations.