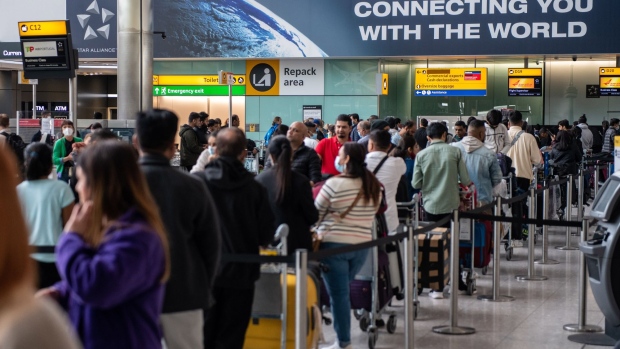 Passengers queue to check in inside the arrivals hall of Terminal 2 at London Heathrow Airport in London, U.K., on Wednesday, April 13, 2022. Travel disruption continued to hit U.K. holidaymakers as officials warned of expected queues at airports later in the week and motorists faced fuel shortages. , Bloomberg

(Bloomberg) -- The British government is speeding up national security checks for new airport workers to address post-pandemic staffing shortages that have contributed to chaos for travelers in the UK and across Europe.

The UK has accelerated the vetting process that all new aviation recruits must undergo, with accreditation checks being completed in around five days on average and counter-terrorist checks taking less than 10 days, according to an emailed press release from the department for transport.

The change is aimed at helping the industry get new employees, such as x-ray screeners, as quickly as possible, so it can meet the surge in demand for flights, it said.

British holidaymakers this summer have been met with scenes of chaos at airports, leaving the aviation industry and governments arguing over who is to blame. Social media has been awash with complaints about long queues at security -- in some cases leading to missed flights -- and piles of misplaced luggage in London.

Staff shortages have been the chief trigger for disruption. Companies that fired workers or lost them to other sectors when planes were grounded during the pandemic are struggling to make up the gap, jeopardizing the nascent recovery of the UK airline industry.

Airlines and airports are also facing strikes by workers demanding better pay and working conditions, adding to the disruptions. Paris Charles de Gaulle airport was calmer on Sunday after some workers halted a strike that led to the cancellation of about a fifth of flights on Friday and Saturday. SAS AB pilots are threatening a strike and talks will continue on Monday.

Ryanair’s Spanish cabin crews are calling for an additional 12 days of strikes this month, while staff at EasyJet Plc bases there began the first of a series of three-day strikes on Friday. The Irish airline expects minimal disruption to flights to and from Spain in July because of the dispute, the carrier said in a statement Sunday. Less than 1% of Ryanair’s flights have been affected by the walkout so far, the carrier said.