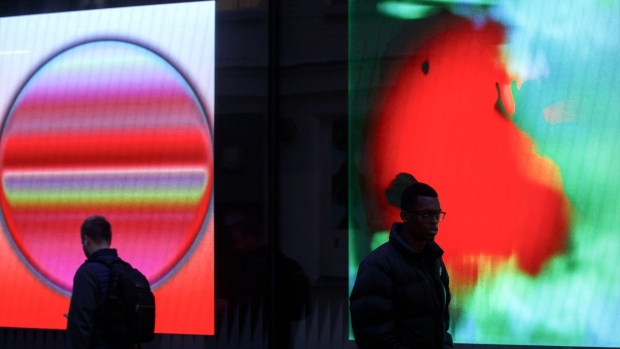 Shoppers and pedestrians pass a series of NFT artworks collectively titled 'MVP Most Valuable Painting' by artist Jonas Lund displayed on screens in the windows of The Flannels Group Ltd. department store on Oxford Street, London, U.K., on Monday, April, 4, 2022. The U.K. announced a plan for government oversight of stablecoins and said it would consult on regulating a wider set of cryptoasset activities, signaling engagement with an industry it has clashed with at times as digital assets gain mainstream appeal. Photographer: Luke MacGregor/Bloomberg , Bloomberg

(Bloomberg) -- The cost of living crisis is the final straw for workers on the UK’s high street.

One in five retail workers plans to quit due to concerns around their finances, abuse from customers and poor mental health after working through the pandemic, according to a new report. Retail Trust, a charity, surveyed more than 1,500 retail staff and found that a quarter of managers also want to leave the industry.

Higher living costs feature most heavily in workers’ concerns. The Retail Trust has seen a 28% increase in the number of applications it receives for financial aid from retail workers this year, and visits to the charity’s website offering financial health support nearly tripled.

As Britons battle the highest inflation in 40 years, those working in shops are among the worst off. Two-fifths of UK supermarket employees earn below the real living wage and an increasing number use food banks, according to the Independent Food Aid Network.

“Our research shows there’s a clear gap between how retailers think their employees are feeling and the reality,” said Chris Brook-Carter, chief executive of the Retail Trust.

The charity provided more than 400,000 pounds ($500,000) in financial support over the past year. The situation poses a serious long-term challenge to the industry as more people leave, according to Brook-Carter.

The Retail Trust has joined with Microsoft Corp., career development firm Workl and UK business consultancy BJSS to create an index allowing employers to track the progress of measures focused on improving their employees’ wellbeing.