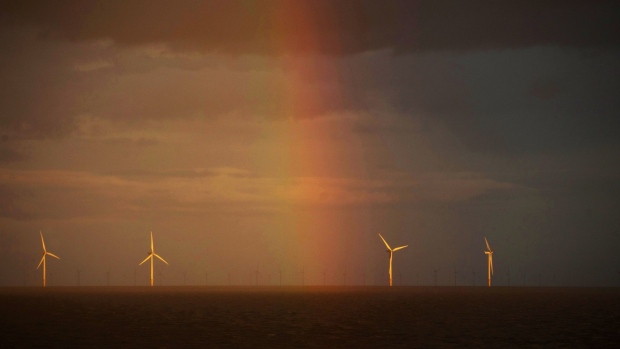 (Bloomberg) -- Government subsidies for British offshore wind farms are set to fall to a record low which will help push down the cost of electricity for homes and businesses.

The UK awarded contracts for wind farms to sell power at fixed prices 5.8% lower than the previous auction, according to a statement from the Department for Business, Energy and Industrial Strategy. Orsted A/S, Iberdrola SA’s Scottish Power unit, Vattenfall AB and a project including AB Ignitis Grupe,  EDP Renovaveis SA and Engie SA were among the winners.

The UK is seeking to achieve net-zero emissions by the middle of the century, and wind power is viewed as central to achieving the country’s climate goals. The turbines will add about 7 gigawatts of clean power capacity to the nation’s fleet from 2026, bringing Britain closer to its target of installing 50 gigawatts by the end of the decade.

Renewables have the advantage of offering stable prices and local energy supply. UK power costs have soared in recent months, driven by a surge in the cost of natural gas following Russia’s invasion of Ukraine.

Wind farm operators will sell power for as little as £37.35 ($44.613) per megawatt hour in 2012 figures, 5.8% below the lowest bid in the most recent auction that cleared in 2019. When adjusted for inflation, that’s about £45.41 per megawatt hour, about a quarter of the UK’s day-ahead power price currently.

The decline in price comes even after the cost of wind turbines rose in recent months as prices increased for key metals like steel and supply chain disruptions created costly delays. The prices will be adjusted for inflation when the power is delivered.

Offshore wind power costs have fallen dramatically in recent years as the UK supported the industry to scale up industrialize production of larger, more efficient turbines.