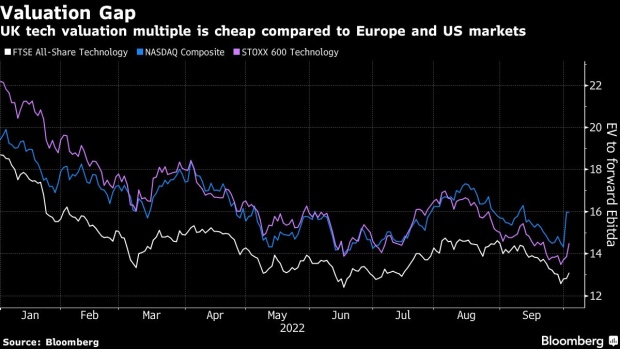 A foreign buying spree of British technology companies has hit a wall after market turbulence scuppered a couple of high-profile deals, casting a shadow over future dealmaking in the sector.

Private equity firm GTCR said on Tuesday it would not be making an offer for software company GB Group Plc, having previously disclosed it was mulling a cash bid for the software company.

That prospective deal collapsed just weeks after another buyout firm, Thoma Bravo, ended talks for cybersecurity company Darktrace Plc. In both cases, the parties said they could not agree on terms, but gave no further details.

GB Group declined to share further details on the cancelled deal, while representatives for Darktrace didn’t immediately respond to requests for comment.

After five major tech M&A attempts this year in a sector that accounts for less than 2% of the FTSE All-Share index, the announcements shocked UK technology shares, pumped up on expectations that a weak pound and relatively cheap valuations would unleash a dealmaking wave.

Shares in GBG and Darktrace plunged after their talks ended, with the latter losing as much as 33% of its value on the day Thoma Bravo ditched its bid.

The good news for the sector is that some takeovers are still proceeding, including Canadian Open Text Corp’s purchase of Micro Focus International Plc, and a bid by France’s Schneider Electric SE for software developer Aveva Group Plc.

However, market turbulence and higher borrowing costs will present hurdles for other deals, especially in cases where the takeover approach comes from a financial suitor, rather than a sector peer that can reap synergies, analysts say.

In such choppy markets, investors and company management may find it hard to agree on the right price valuations, Goodbody analyst George O’Connor said. And Britain’s deepening economic doldrums mean buyers can probably afford to wait.

“Valuations are expected to go cheaper as we see an unsettling macro wash through to cautious (earnings) outlook statements,” O’Connor said.

Another issue is that the current backdrop of rising interest rates is a challenging one for leveraged buyouts, as many private equity-led deals tend to be. As borrowing costs rise, private equity managers must re-assess the impact on their IRR, or internal rate of return -- a measure of how much they can expect to earn over the life of the investment.

“I don’t think it means UK M&A is paused, more that buyers are scrutinizing targets in more detail,” said Neil Campling, head of TMT research at Mirabaud Securities, in an emailed comment.

Achieving the targeted return from their leverage buyout model is tougher in a rising-rate environment, so buyout groups have to look deeper or set a higher watermark, Campling said. So when investors “analyze the books, it may well be that they don’t quite see the bargain they first thought,” he added.

But many are inclined to consider the recent hiccups as just that, mostly because the pound’s recent exchange rate slump makes UK companies cheaper than ever to foreign buyers. A Bloomberg survey late last month showed British firms represented seven of the top 10 global M&A targets, with tech names placing highly.

“Trend being paused? Not really. The dollar is still very strong, and UK tech is still cheap, even in pound terms,” Panmure Gordon analyst Alasdair Young said in an emailed comment.