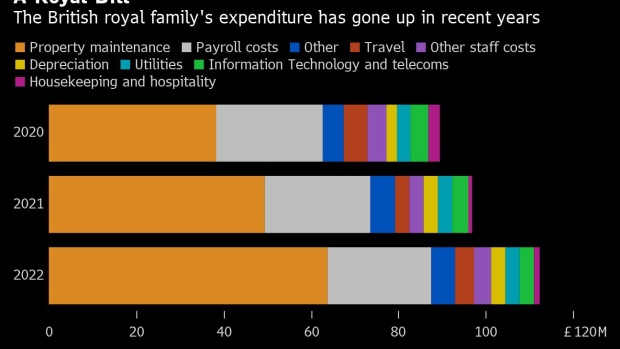 (Bloomberg) -- UK taxpayers will pay an additional £27.3 million ($33 million) over the next two years to plug a funding gap at the royal family and cover a drop in profit at the Crown Estate, which helps pay their expenses.

Demands for more government cash follow a 17% increase in spending by the royals last year and comes at a time when the average UK household income fell for the longest period since records began in 1955. Family incomes are 1.3% lower than the year before, and public-sector workers  have walked off the job in protest against pay offers below the current rate of inflation.

Royal spending rose 17% in the fiscal year through April 2022 to £102.4 million, the family’s latest accounts released Thursday in London show. Most of the gain came from a 29% jump in the £69.3 million cost of maintaining the monarch’s properties, including Buckingham Palace, St. James’s Palace, Windsor Castle and other royal residences.

Outlays have risen in each of the past four years — despite the pandemic and national lockdowns — and soared 53% from 2018-2019’s reported £67 million.

Sir Michael Stevens, the Queen’s accountant and Keeper of the Privy Purse, said the year included “operational and financial challenges,” in part because Covid curtailed events and restricted tourist access to the Royal Palaces that helps to bring in revenue.

Housekeeping and hospitality costs went up by 55%. Travel expenses increased by about 40% to £4.5 million as pandemic restrictions loosened,  allowing the Prince of Wales to visit Barbados and the Duke and Duchess of Cambridge to tour the Caribbean. That trip cost £226,383.

The taxpayer pays the majority of the royal family’s spending through the Sovereign Grant, which was fixed at £86.3 million this year.

This grant is set each year based on whichever is highest: the amount of the previous year’s grant, or 25% of the profits from the £16.5 billion Crown Estate, which receives income from prime West London land and windfarms on the UK’s seabed.

If the Sovereign Grant were fixed at 25% of Crown Estate profits to match the decline, it would result in grants of £67.3 million and £78 million, or £145.3 million in total.

That £27.3 million shortfall will have to be met by the public purse from another source, the report forecasts. That would further increase the burden on taxpayers, who are struggling with rising costs for food and energy.

The royal family says this year’s £86.3 million Sovereign Grant is equivalent to £1.29 per person in the UK.

Some respite in the royal family’s bill might come from a bounce back in ticket revenue from people returning to the royal art collections. Royal palaces were closed to visitors during the pandemic and unable to generate income, contributing to a decline in income to £9.9 million this financial year, down from £20.2 million in the year before the pandemic.

The royal family also received a £2.4 million reimbursement from the Duke and Duchess of Sussex for the refurbishment of Frogmore Cottage.