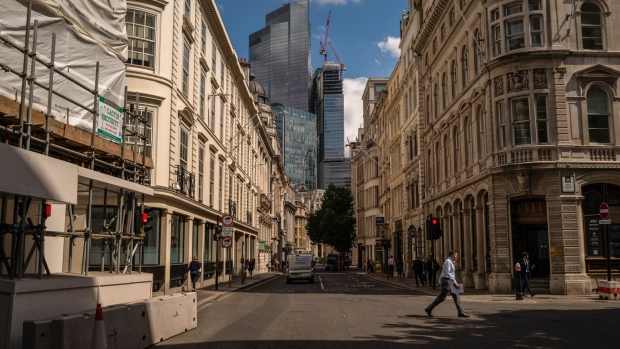 Construction cranes above the skyscraper development at 8 Bishopsgate in the City of London, UK, on Monday, Aug. 1, 2022. Brexit raised costs linked to product certification and increased paperwork on imports, along with the pandemic and Russia’s war in Ukraine causing major shortages of materials, long lead in times on products and costs rising faster than inflation. , Bloomberg

The UK government is set to announce a package aimed at boosting growth in financial services and the City of London on Friday, according to people familiar with the plans.

The Treasury is in the process of finalizing the package and has penciled in the end of the week for the announcement, pending sign-off from the Cabinet, one of the people said.

City minister Andrew Griffith had been expected to unveil the reforms, which the government will pitch as securing new opportunities from Brexit by sweeping away unnecessary regulations, before Christmas. Key to that has been a plan to replicate the “Big Bang”, the wave of deregulation in the City in 1986.

It’s unclear how radical any changes to the rules might be, or how much of a difference they will make to London’s competitiveness.

--With assistance from Katherine Griffiths.