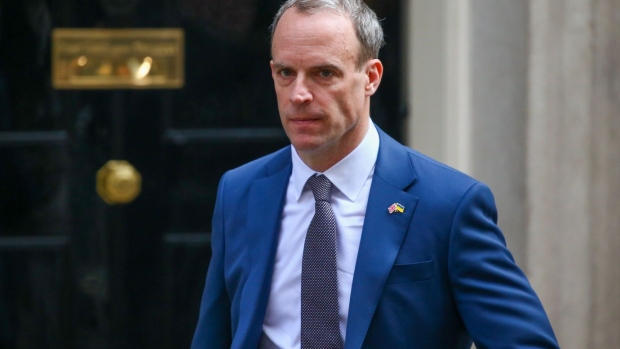 Dominic Raab, U.K. deputy prime minister, departs following a meeting of cabinet ministers ahead of the presentation of the spring statement in London, U.K., on Wednesday, March 23, 2022. U.K. Chancellor of the Exchequer Rishi Sunak is due to give his spring statement amid pressure from his own MPs to announce new support to help Britons through a growing cost-of-living crisis. , Bloomberg

Among 64 Tory constituencies where the Lib Dems won more than 20% of the votes in the 2019 general election, the ruling party is expected to lose 26 of them if an election was held immediately, YouGov projected based on a voter survey. That includes Esher and Walton, the seat held by deputy prime minister Dominic Raab, as well as Surrey South West, which is held by former foreign secretary Jeremy Hunt.

Meanwhile, in London, Labour is expected to pick up seats in Kensington and cities of London and Westminster.

The Tories were put on alert last week after losing a by-election in a traditionally Conservative constituency to the Lib Dems in a drastic shift. That’s put fresh pressure on Johnson, whose government is grappling with a cost-of-living crisis after a string of scandals including illegal pandemic parties.

Even among the 38 seats the Tories are expected to keep, their margins have shrunk to less than five points in 11 of them, according to the YouGov poll, which surveyed 13,459 voters across England between June 15 and June 29.