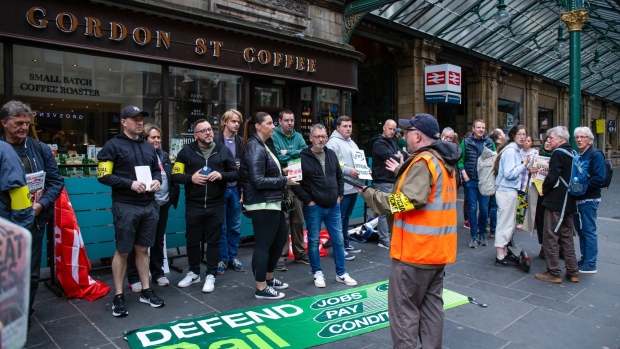 (Bloomberg) -- The UK train drivers’ union said it’s likely to coordinate any strikes resulting from a ballot across 10 companies, aiming for maximum disruption to railways amid disputes over pay.

Results from the previously announced vote are due next Monday, according to Keith Richmond, a spokesman for the Associated Society of Locomotive Engineers and Firemen, which has more 21,000 members. Coordinating any action as a walkout covering much of Britain would be an “obvious” move, he said Tuesday.

A walkout by Aslef drivers would herald a new wave of problems across Britain’s railway even as the National Union of Rail, Maritime and Transport Workers consults with members on the latest proposals to resolve its dispute, which led to the country’s biggest train strike in 30 years last month.

Aslef had called ballots for industrial action at 12 rail companies amid failed attempts to secure higher worker pay, according to its website. Those include LNER and Great Western, which respectively link London with Scotland and southwest England and Wales; ScotRail, the Southeastern commuter service; and Northern Trains and TransPennine, which provide vital transport links in northern England.

Of the 12, strikes have already been held by workers at Greater Anglia, Hull Trains and the Croydon Tramlink. The RMT’s three-day national strike, primarily over job security, last month likely cost the economy almost £100 million ($121 million), with London dealt the biggest blow, according to analysis by the Centre for Economics and Business Research.