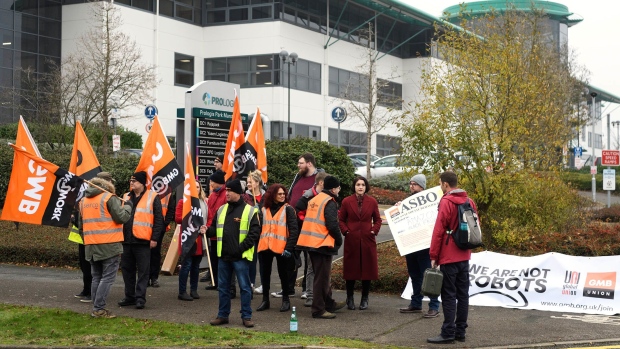 MILTON KEYNES, ENGLAND - NOVEMBER 23: Members and supporters of the GMB union protest outside the Amazon offices as the company holds it's annual Black Friday sales, on November 23, 2018 in Milton Keynes, England. Amazon workers in Italy and Spain are also expected to holds demonstrations for 24 hours in a joint protest against working conditions in the fulfillment centres of the online retail giant. (Photo by Leon Neal/Getty Images) , Photographer: Leon Neal/Getty Images Europe

(Bloomberg) -- One of Britain’s largest unions warned that cash banknotes may be in short supply over the Christmas holiday period if its members go on strike as planned starting Dec. 5.

The GMB union, which represents delivery staff at G4S Cash, wrote to the chief cashier at the Bank of England to say that shortages are likely. G4S delivers money to retailers including Tesco Plc, Walgreens Boots Alliance Inc. and Asda Group Ltd. as well as to banks including Barclays Plc.

The union’s members are due to hold a 48 hour strike following a ballot over pay that showed 97% of its members supported action. The company proposed a 6.5% wage increase -- well short of the 11.1% rate of inflation -- or a two-year deal, with a higher initial increase of 8.5% on the basis that a cap would be introduced in the second year. Both offers were rejected by the union.

“G4S Cash staff are low paid workers doing a dangerous job, transferring the cash so many of us still rely on every day,” said Eamon O’Hearn, national officer at GMB. “These staff provide a vital service. If they walk out, there is a real risk of cash shortages over the festive period.”

GMB said it believes the Bank of England pressed G4S into improving its offer the last time the workers voted to strike, noting the central bank’s insurers demand that minimum staffing levels are maintained. The union hopes that bringing attention to the issue will drive the central bank to do the same again, especially since the strike feeds into preparations for a seasonal surge in spending around the holiday.

“The effectiveness, resilience and sustainability of that distribution, including its security, is a priority for the Bank of England,” an official from the BOE said in an e-mailed statement, noting the central bank doesn’t discuss its activities around banknote distribution becasue of security issues. “We continue to engage with relevant stakeholders, including G4S.”

(Updates with details of GMB concerns and comment from BOE.)