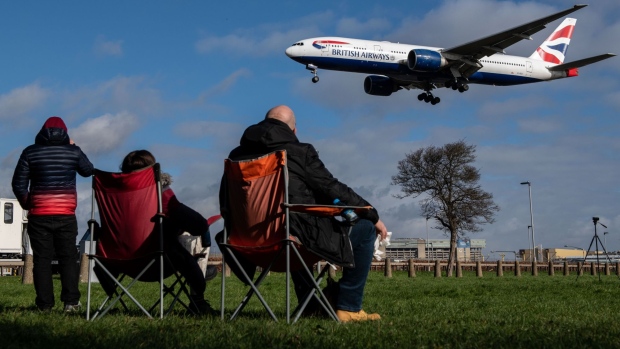 (Bloomberg) -- Britain set out plans to bolster airlines and airports roiled by the coronavirus pandemic, while emphasizing that growth must be in line with steps to slash carbon emissions and promising a charter for traveler rights.

The ten-point strategy revealed by the government Thursday lists ambitions including sustainable growth in both passengers and cargo and the addition of airport capacity where justified, while committing to net zero emissions from UK aviation by 2050 and improvements in the “customer experience.”

The Flightpath to the Future plan also targets job creation and a skills upgrade to accommodate technologies resulting from the drive toward decarbonization, including drones, flying taxis and electric planes, and stresses that benefits must be spread across the country as part of a so-called leveling-up agenda.

The roadmap is partly an attempt to restore relations with an aviation sector that complained of being cut adrift during the pandemic, as the government resisted aid payments on a scale seen elsewhere while imposing some of the most stringent travel curbs. It’s also aimed at assuaging consumer concerns after thousands waited months for compensation when flights were canceled.

Aviation Minister Robert Courts said that while the pandemic posed an “existential threat” to aviation, it also presents a chance “to build back better than ever before” now that the recovery has begun.

The plan, first mooted in 2020, includes two central measures, one aimed at industry and the other at the public.

Industry lobby groups welcomed the blueprint, but said that direct government support will be critical.

The Airport Operators Association said ministers should “not only provide policy certainty to achieve a UK-wide recovery but also back their ambitions with funding.” Measures could include financing for specific routes, a “green airport fund” for investment in a sustainable recovery, and steps to exploit Brexit-related openings such as duty-free shopping for arriving passengers.

It said that U.K. airports, such as London Heathrow, Europe’s busiest prior to the pandemic, have emerged in a worse position than many international competitors that benefited from more generous support.

Airlines UK, which represents carriers including British Airways and EasyJet Plc, said there needs to be “a laser-like focus from government on the levers it can pull to make the UK a truly competitive global aviation hub.”