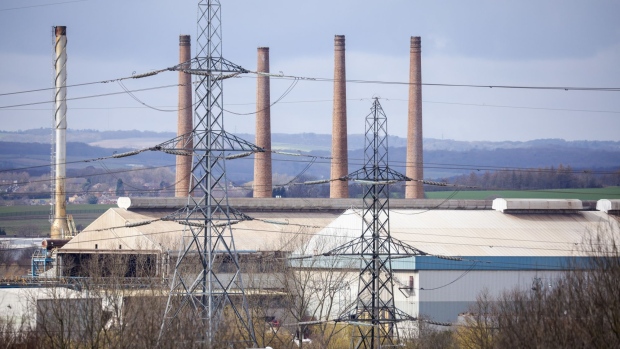 The steel bar mill and engineering bar manufacturing plant, operated by The Liberty Steel Group, in Rotherham, U.K., on Monday, March 15, 2021. British government officials are in constant contact with Liberty Steel amid concerns jobs and plants may be at risk because of the unraveling of Greensill Capital, the biggest lender to Sanjeev Gupta's GFG Alliance Ltd., which includes the steelmaker Photographer: Jason Alden/Bloomberg , Bloomberg

(Bloomberg) -- The UK is considering measures to alleviate soaring electricity bills for energy-intensive industries such as steel, ceramics and cement in a bid to protect jobs and boost competitiveness.

The government on Friday opened a consultation on whether to lift the exemption from paying certain renewable energy levies to cover 100% of costs from 85% currently, according to a statement. The government already extended the program, which covers a selection of energy-intensive industries, by three years in April.

“With global energy prices at record highs, it is essential we explore what more we can do to deliver a competitive future for those strategic industries so we can cut production costs and protect jobs across the UK,” he said in the statement.

The consultation will look at reliefs provided to energy intensive industries to protect them from most of the indirect costs stemming from three government renewable subsidy programs: Contracts for Difference, the Renewables Obligation, and Feed-in Tariffs for small-scale renewables.

It comes as Prime Minister Boris Johnson faces increasing pressure to step up assistance to help households cope with surging living costs. Cornwall Insight and Investec both say Britons face average annual energy bills rising above £4,200 ($5,102) in January from just under £2,000 currently, while energy consultancy Auxilione on Thursday said bills could surge past £5,000 a year in the second quarter of next year.

Internal government analysis also shows that planned power cuts may be needed this winter in a “reasonable worst-case scenario.”

On Thursday Johnson, Kwarteng and Chancellor of the Exchequer Nadhim Zahawi held talks with energy companies to discuss how they plan to spend their bumper profits and explore ways to help UK households struggling with the soaring cost of living. The prime minister has said he won’t make any major fiscal announcements while his ruling Conservative party elects his successor.

The consultation runs until Sept. 16, following which the government said it will “carefully consider” the responses. It didn’t say when it will act on the findings.