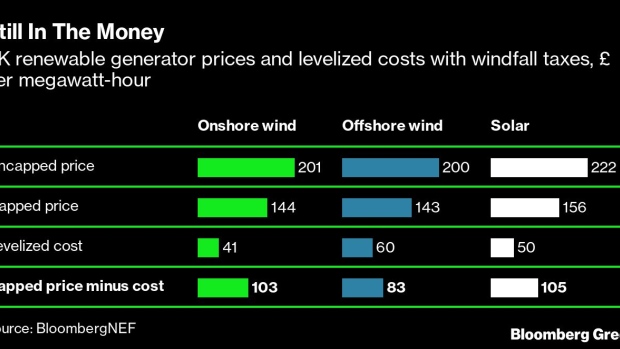 Wind turbines on the Red Tile Wind Farm near Cambridge, UK, on Monday, Aug. 15, 2022. Like soldiers in an electron battlefield, EVs en masse are great for storing renewable electricity and sending it back to the grid during peak demand. , Bloomberg

A couple of weeks ago, the UK announced a new windfall tax on what the government calls “excess” profits of nuclear and renewable energy generators. With natural gas prices soaring, these technologies now generate power at a much lower cost than gas-fired power plants, making them much more profitable. The Electricity Generator Levy, which goes into effect on Jan. 1, will enact a 45% tax on revenues from power sold at prices above £75 ($90) per megawatt hour.

The tax is meant to help fund the government’s own freeze on household electricity bills. It will also cost renewable generators more than a quarter of their potential revenue, and in so doing, will add to the setbacks that UK clean energy developers face today. An analysis by clean energy research firm BloombergNEF finds that the tax will certainly affect 14 gigawatts of wind and solar power and 7 gigawatts of nuclear power — in total, close to 40% of the country’s capacity for low-carbon power generation.

As that percentage indicates, many plants are exempt from the levy. Those that have a so-called contract for difference (CfD) with the government and sell at fixed prices are exempt, regardless of their power price. Also not covered are plants that generate less than 100 gigawatt-hours or have less than £10 million ($12 million) of annual revenue, a category which BNEF estimates will be in the range of 20 to 100 megawatts capacity. More than half of onshore wind will likely be exempt, almost half of offshore wind will be exempt, and potentially almost all solar, thanks to the small sizes of UK solar projects.

But the revenue impact of the windfall tax could still be substantial. If power prices remain as elevated as they are today, BloombergNEF finds, then the tax would reduce potential revenue by 27 to 28%.

That does not mean projects will necessarily become unprofitable. Onshore and offshore wind and solar would still earn substantially more revenue than their levelized cost of electricity generation.

Even if projects remain profitable, however, the tax injects uncertainty that could impede further renewable development.

One element of uncertainty actually lies across the English Channel, where the EU has its own revenue clawback mechanism in the form of a flat price cap of €180 (£155) per megawatt-hour. At current EU and UK power prices, the impact of each tax is nearly identical. That means if developers of wind or solar assets are planning their next projects and assume power price parity, they will be relatively indifferent between the two markets.

But if power prices fall back in either market, then the UK’s tax could become much harder to bear. Although the EU’s cap on prices is more punitive (applying to all revenue above €180 or £155 per megawatt-hour), its impact shrinks rapidly once prices fall. The UK’s lower threshold affects generators over a wider range of power prices. If prices in the UK rise, however, then it could be a more profitable investment for a developer.

Smart renewable developers will of course seek out the most profitable market. But the quest for profit in Europe is now much more complex. It requires an additional layer of revenue calculation, not to mention stomaching a significant degree of short-term price uncertainty, over which developers have zero control.

There is one (potential) factor in favor of UK renewables in the current energy crisis: A Conservative Party policy enacted in 2015 effectively banned onshore wind development, and the new government under Prime Minister Rishi Sunak is under pressure to change that. Not only that, but developers have identified local communities that support, rather than oppose, development of new onshore wind. The reopening of this pathway — the quickest way to add a significant volume of new renewables — would be most welcome, windfall tax or no.