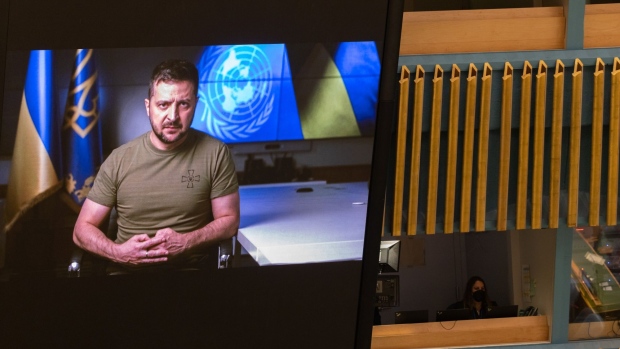 Volodymyr Zelenskiy, Ukraine's president, on a monitor during the United Nations General Assembly (UNGA) in New York, US, on Wednesday, Sept. 21, 2022. All eyes will be on US President Biden on Wednesday as he tries to rally international support for Ukraine following Russia's escalation with world leaders gathered at the United Nations. , Bloomberg

(Bloomberg) -- Ukraine formally applied to join NATO Friday but the alliance responded with immediate caution, seeking to avoid provoking a full-blown conflict with Russia since members are compelled to come to each other’s defense.

President Volodymyr Zelenskiy announced the accelerated bid in a video address to the nation, saying Ukraine has already made its “path towards NATO,” demonstrating “compatibility with the alliance’s standards.”

NATO Secretary General Jens Stoltenberg told reporters late Friday in Brussels the alliance remains open to all democracies in Europe and that Ukraine has a right to choose its own path, but the immediate focus is on providing support to Kyiv.

Ukraine may have trouble getting allies to even accept the invitation given the current tensions with Russia. President Vladimir Putin has repeatedly pointed to NATO’s enlargement as a threat to Russia, even though US and European officials have dismissed those allegations.

US National Security Adviser Jake Sullivan on Friday reaffirmed the Biden administration’s position that Ukraine’s request to join NATO should be considered “at a different time.” “The best way for us to support Ukraine is through practical, on-the-ground support in Ukraine and that the process in Brussels should be taken up at a different time,” Sullivan said.

Ukraine’s bid would need sign off from all 30 allies, a process that can take years even in the smoothest of circumstances. Kyiv has long expressed its desire to join the military alliance but that’s seen by many as a more provocative step than its bid to join the European Union.

“We understand that this requires the consensus of all members of the alliance,” Zelenskiy said. “While this is happening, we offer to implement our proposals regarding security guarantees for Ukraine and all of Europe in accordance with the Kyiv Security Compact, which was developed and presented to our partners.”

A leaders’ statement from the North Atlantic Treaty Organization summit in Bucharest in 2008 has long left room for ambiguity over Ukraine. Leaders then welcomed the country’s aspirations for membership, saying that Ukraine, along with Georgia “will become members of NATO.”

Sweden and Finland most recently applied to join the alliance but their applications have faced hurdles from Turkey. Only after a country’s application has been ratified by all allies do they enjoy collective defense benefits under Article 5.

Since Russia invaded Ukraine in February, NATO allies have supported Kyiv with military aid and training on a bilateral basis but have been careful not to intervene more formally as an alliance. They’ve also stepped up their presence on the alliance’s eastern flank.