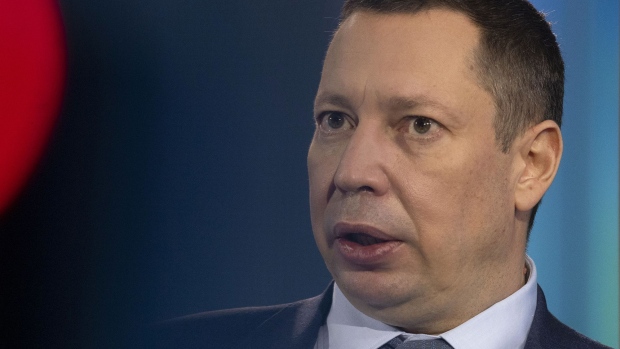 Shevchenko submitted his resignation letter to President Volodymyr Zelenskiy, according to a statement posted on the central bank’s website on Tuesday. His departure is subject to approval by parliament. Once the assembly accepts it, his first deputy, Kateryna Rozhkova, will take over as the acting governor, according to the bank’s press office.

“Due to health-related reasons, which I cannot continue to ignore, I made a difficult decision for myself,” Shevchenko said in the statement.

Until his resignation is processed, Shevchenko said that the central bank board will “continue to perform its functions and manage the activities of the National Bank in its current composition.”

His departure comes as International Monetary Fund officials prepare to assess the country’s financial needs later this month. Ukraine seeks to get a large-scale loan program from the lender apart from a $1.3 billion in a single unconditional disbursement the IMF is already considering.

“It’s not a tragedy for the National Bank of Ukraine, as Shevchenko hasn’t proven himself in this post, though it’s worth paying tribute to him for not yielding the central bank’s independence,” said Oleksandr Parashchiy, research director at Kyiv-based Concorde Capital.

A new governor may be appointed quickly given the president’s backing in parliament, he said. Parliament is to debate Shevchenko’s resignation on Thursday, lawmaker from the president’s Servant of the People party Andriy Gerus said by phone.

The central bank hiked interest rates to 25% in June, citing the “shift in the fundamental parameters” of the country’s economy during the war. It also had to devalue the hryvnia, calling it a 25% correction, in July to protect its foreign-currency reserves.

The bank has flagged a pause in monetary tightening until at least the second quarter of 2024 as long as the impact of war on the economy doesn’t deviate from their expectations.

Ukraine was forced to ask investors to defer all payments due under its sovereign eurobonds for a period of 24 months and to amend the payment terms on its GDP-linked securities.

The 49-year-old Shevchenko led the central bank since July 2020 and was criticized by Zelenskiy and the IMF in the early days of his tenure after loss of key staff from the central bank. The barbs eased after Russia invaded on Feb. 24, as the monetary authority has played a key role in supporting the wartime economy.

(Updates with details on IMF, date for resignation vote from fifth paragraph)