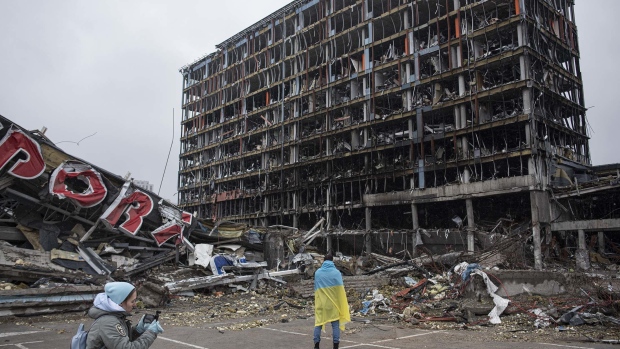 KYIV, UKRAINE - APRIL 03: Ukrainian singer Vitalii Kozlovskyi poses for a music video outside the Retroville trade center on April 3, 2022 in Kyiv, Ukraine. After more than five weeks of war, Russia appears to have abandoned its goal of encircling the Ukrainian capital. However, Ukraine expects a renewed fight in the east and south. (Photo by Alexey Furman/Getty Images) , Photographer: Alexey Furman/Getty Images Europe

(Bloomberg) -- Russia’s invasion of Ukraine has ushered in a new era of cyber warfare, raising the risks of spillover from conventional conflicts, according to the chief executive officer of Bitdefender Holding BV.

Florin Talpes, whose Romania-based cybersecurity software company has filed for an initial public offering in the U.S., said that the ongoing war has split the hacking community, with Anonymous attacking Russian institutions and some ransomware groups backing Moscow.

“The major change we’re seeing is the fact that private cybercrime groups are taking sides,” the CEO said in an interview. The appearance of these actors, “which play an active role in the war, boosts the risks because they don’t have the same war logic or frameworks as countries.”

Meanwhile, Russia has become a global “superpower” in state-run cyber capabilities, he said. Kremlin-backed hackers have intensified their social-media influence and the spread of fake news to counter the narrative that Russia is the aggressor, according to the CEO.

Talpes said the type of attacks targeting Ukraine has also changed. While previously hackers mainly focused on extracting ransom from companies, many now target the destruction of key infrastructure sites, he said, citing a recent attack on a Ukrainian telecoms provider.

More and more “red lines” are being tested, which is a “risk and a significant challenge,” he said. Bitdefender is offering free cyber-protection to Ukrainian companies and individuals during the war.

The company, which competes against Webroot Inc., McAfee Inc. and NortonLifelock Inc., confidentially filed for an IPO to the Securities and Exchange Commission late last year. While the start up was valued at $600 million in 2017, when private-equity firm Vitruvian Partners LLP purchased a minority stake, it may now be worth more than a $1 billion.

“We might be the first unicorn headquartered in Bucharest,” Talpes said. He declined to comment further on the IPO process.