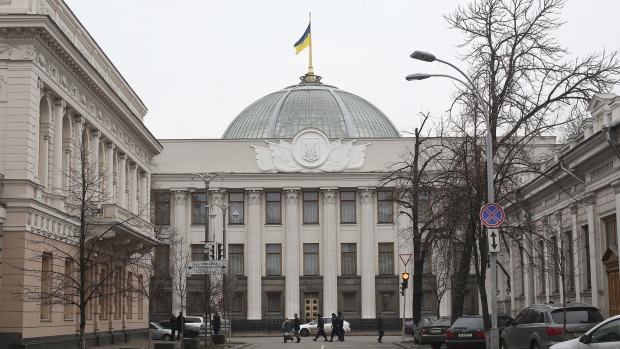 A Ukrainian national flag flies above the national parliament building, also known as the Verkhova Rada, in Kiev, Ukraine, on Tuesday, Feb. 23, 2016. The face of Ukraines Orange Revolution a decade ago, she became prime minister before infighting sank the pro-democracy government and allowed its Russian-backed adversary to take charge. , Photographer: Bloomberg/Bloomberg

(Bloomberg) -- Ukraine’s efforts to secure almost $1.5 billion of Western financing got a boost as the European Union approved a tranche of aid and the International Monetary Fund prepares a review that could unfreeze a $5 billion loan.

The European Commission said Wednesday that it’s endorsed a 600 million-euro ($710 million) disbursement to Ukraine -- the second half of a macro-financial package agreed on last year. In a statement, it noted “a positive assessment on the fulfillment of conditions” and “good progress” on satisfying requests from the IMF.

The Finance Ministry in Kyiv said the money will be used to “maintain economic stabilization.”

With Covid-19 vaccinations among the slowest in Europe and the economy slipping back into recession, there could be more assistance on the way.

An online mission by the IMF will start on Sept. 18, with the government optimistic of receiving a $750 million transfer in November or December, according to Prime Minister Denys Shmyhal. He said Tuesday that all the lender’s conditions have been met.

Those terms include strengthening anti-corruption measures and shielding the central bank from political meddling. Delays in meeting those requests have left the loan, which expires at year-end, in limbo for months.