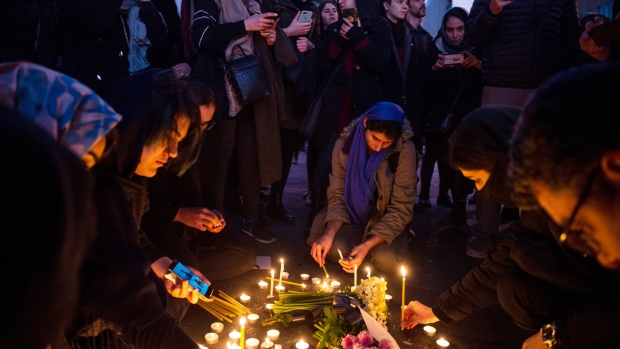 Mourners light candles while gathering during a vigil for the victims of the Ukraine International Airlines flight that was unintentionally shot down by Iran, in Tehran, Iran, on Saturday, Jan. 11, 2020. Bloomberg/Ali Mohammadi

Ukraine is pressing Iran to send the black box from the Boeing Co. plane that crashed after taking off from Tehran last month, Ukraine Foreign Minister Vadym Prystaiko said.

“The black box and cooperation with Tehran was the very difficult issue from the beginning and we will try to keep the message” focused on recovering the data, Prystaiko said at the Foreign Press Association in Rome on Monday.

Iran is under international pressure to provide more information on the circumstances that led to the shooting down of Ukrainian International Flight 752. The three-year-old Boeing 737-800 abruptly stopped transmitting its position and plunged to the ground about two minutes after takeoff from Tehran, killing all 176 aboard. It occurred days after the killing by the U.S. of Iran’s top general, Qassem Soleimani.

Iran has “no plans for now” to send the black box from the plane to Ukraine or any other country, the state-run Islamic Republic News Agency reported Jan. 19.

Prystaiko said that now “we have to plan in the longer run how to get the black boxes and how to get the investigation going, we are coordinating with five nations.”

The issue is not “because some soldier was trigger-happy and over reacted, we want to know the chain of command, who gave the order, to be brought to justice,“ Prystaiko said.