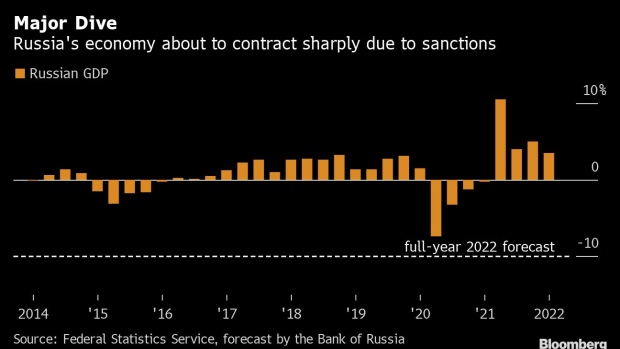 STOCKHOLM, SWEDEN - MAY 17: Finland's President Sauli Niinisto poses for a picture with Swedish Prime Minister Magdalena Andersson at the Adelcrantz Palace on May 17, 2022 in Stockholm, Sweden. Finland's President Sauli Niinisto and his wife Jenni Haukio pay a State Visit to Sweden from May 17th to 18th, at the invitation of King Carl XVI Gustaf of Sweden. (Photo by Michael Campanella/Getty Images) , Photographer: Michael Campanella/Getty Images Europe

Turkish President Recep Tayyip Erdogan blocked the alliance from starting the countries’ accession process, saying he’s frustrated with the approach of some bloc members toward Kurdish groups he considers terrorists.

The US Senate confirmed Bridget Brink the next ambassador to Ukraine, a move that comes as the embassy in Kyiv reopened after three months. Signs of strain are spreading across the Russian economy from the slow burn of Western sanctions.

“We are optimistic on an agreement,” Lindner said at the start of a two-day gathering of finance ministers and central bank chiefs near Bonn. The country will require support in the “double digits,” he said.

Ukrainians Continue to Cross Back From Poland (7:41 a.m.)

Ukrainians continue to trickle back from Poland, Polish border authorities said on Twitter. On Wednesday, 28,000 people were cleared into Ukraine against 21,500 who entered Poland.

Since Russia’s invasion on Feb. 24, 3.46 people crossed into Poland from Ukraine, and those moving the opposite way have reached 1.39 million. In all, 1.85 million Ukrainians have returned to the country, according to latest United Nations figures. The UN says it premature to draw conclusions on definitive trends.

Ukraine said Wednesday that the number of military-age men trying to leave the country illegally is growing.

Russia Says One Dead in Attack Near Ukraine Border (7:01 a.m.)

At least one person died and others were wounded in an attack on a Russian village along the Ukrainian border, the local governor said in a Telegram post.

Kursk Governor Roman Starovoit posted several photos showing damage from the attack, which he attributed to “the enemy.” Regions along the border have alleged Ukrainian forces have launched numerous strikes on Russian territory. Ukrainian officials haven’t commented on the incident.

Thanks to surging prices for its exports of oil and gas, the Kremlin has been able to steady the ruble and limit the impact of Western sanctions on consumers and the war effort.

Yet signs of strain are spreading, from the shuttered stores of foreign brands that fled to steep plunges in car sales, mortgage applications and many tax collections. Though they won’t say so publicly, Finance Ministry officials have foreseen the biggest economic contraction in a generation this year as sanctions starve companies of key components, technologies and capital.

West Texas Intermediate erased early losses to trade above $110 a barrel after sliding 4% over the previous two days.

The global oil market has been gripped by volatile trading since late February, when Russia’s invasion of Ukraine roiled energy flows. Despite the recent weakness, prices remain more than 40% higher this year amid strength in product markets, lower inventories and record gasoline prices.

The Senate vote to confirm Brink as the new top envoy in Kyiv came after the US reopened its embassy in Ukraine’s capital three months after shutting it down.

“Today we are officially resuming operations at the US Embassy in Kyiv,” Secretary of State Antony Blinken said in a statement. “The Ukrainian people, with our security assistance, have defended their homeland in the face of Russia’s unconscionable invasion, and, as a result, the Stars and Stripes are flying over the Embassy once again.”

Turkey’s Foreign Minister Mevlut Cavusoglu said NATO members acknowledge that Turkey’s security concerns are “justified,” and called on the alliance to do more to address them.

“It’s unacceptable for member states or those applying for membership to support groups that target us,” Cavusoglu said after meeting with US Secretary of State Antony Blinken in New York.

Cavusoglu said Sweden is supplying arms to the Kurdish militant group YPG in the name of supporting its fight against Islamic State but the same arms are being used to kill Turkish soldiers and civilians.

United Nations Secretary-General Antonio Guterres said he’s negotiating with Russian, US, Ukrainian and EU officials to give Russian food and fertilizers “unrestricted access” to global markets as the Ukraine invasion has exacerbated what already was a global food crisis.

Guterres told a ministerial conference on food security at the UN in New York that there’s a “long way to go” in negotiations and he won’t go into details “because public statements could undermine the chances of success.”

Speaking at the same event, US Secretary of State Antony Blinken said they were meeting during “the greatest global food security crisis of our time,” caused by a the deadly combination of the Covid-19 pandemic, a worsening climate crisis and the Russian invasion. He pledged an additional $215 million in emergency food aid, and called on Russia to create safe corridors for Ukraine to export food by land and sea. “There are an estimated 22 million tons of grains sitting in silos in Ukraine right now,” Blinken said.

US Secretary of State Blinken and Turkish Foreign Minister Cavusoglu discussed Turkey’s resistance to expanding NATO to add Finland and Sweden as they began a meeting in New York.

Turkey has always supported NATO’s open-door policy, Cavusoglu told reporters, but his country “has security concerns that must be met.” Blinken said the alliance would work through the concerns of all three countries as “allies and partners.”

Russians Scale Back Operations in Eastern Ukraine, US Says (7:21 p.m.)

Russian forces in eastern Ukraine are scaling back their operations, focusing on smaller objectives like towns, villages and crossroad intersections after failing to make significant progress in their assault on territory in that region, a senior US defense official said.

The Russians have been using company-sized units to capture objectives, instead of the larger battalion-sized units they had been using, the official told reporters, adding that the Russians continue to have issues with communicating between units.

Russia’s economic growth slowed in the first quarter, as the initial impact of sanctions imposed following President Vladimir Putin’s invasion of Ukraine began to show up.

Gross domestic product rose 3.5% from a year earlier, down from a gain of 4% in the previous three months, the Federal Statistics Service said Wednesday, citing preliminary numbers.

Most of the latest results were recorded before Putin sent troops into Ukraine on Feb. 24, triggering sweeping sanctions from the US and its allies. The sanctions are expected to set off a deep recession in Russia, with the economy contracting as much as 10% this year, according to the central bank.

“We are doing the legal assessment,” Commission Vice President Valdis Dombrovskis told reporters. “But legally we must cast this net wide because there´s a principal in international law that aggressor pays, and we must make Russia pay for the damages is creating.”