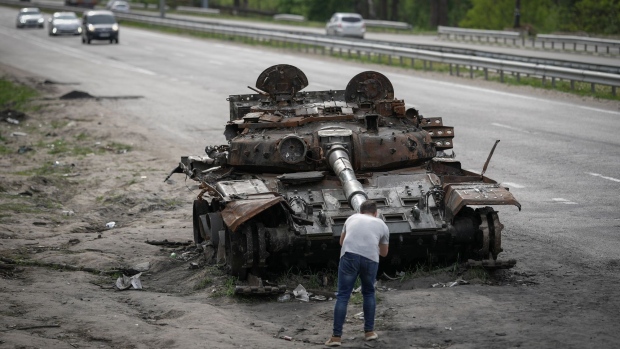 (Bloomberg) -- Estonian President Alar Karis said he’s confident that Turkey’s objections to Sweden and Finland joining NATO can be overcome through negotiation, but expansion of the defense alliance would take longer than initially anticipated.

Turkey has so far blocked the expansion, saying those countries have given too much support to Kurdish groups it regards as terrorists.

“Maybe in 6 months,” Karis told Bloomberg on the sidelines of Davos. “Within a year it should be there. But again it’s very difficult to predict especially in this stage of this process.”

The comments come as Russia’s Security Council Secretary Nikolai Patrushev warns that his country would take a NATO expansion as a direct threat to its security and would have to react.

In Ukraine, Russian-installed occupation authorities in the Kherson region said they would ask for a military base there to make their presence permanent.

But he told Bloomberg on the sidelines of Davos the dispute could potentially slow down their inclusion in the defensive alliance. “Maybe in 6 months,” he said. “Within a year it should be there. But again it’s very difficult to predict especially in this stage of this process.”

Asked what would be the repercussion if Turkey refused to budge, he replied: “I don’t know, I don’t think about it. NATO’s a collective organization and then we have to sit down and think about it. If it’s right to have a veto from one country or if we should have a voting system, I don’t know.”

Russia’s war against Ukraine has deepened a global food crisis. It has also made the invader among the biggest winners of the mess it helped create.

The war has blocked Ukraine’s grain exports by sea, cutting off vital supplies for countries from Somalia to Egypt. The disruption, topped by hot weather and droughts that are hurting wheat crops in other parts of the world, has sent prices of the grain to near-record highs.

Russia has continued to ship its wheat at the now-higher price, finding willing buyers and raking in more revenues per ton. It is also expecting a bumper wheat crop in the next season, suggesting it will continue to profit from the situation.

Ukrainian President Volodymyr Zelenskiy accused Russia of turning the eastern Donbas  region into a “slaughterhouse” as they try to squeeze Ukrainian troops out of a strip of land in the area.

The Russians were trying snuff out “anything living in this area,” Zelenskiy said in his daily statement on Monday night.

The fighting is most active near Lysychansk and Sievierodonetsk, with Russian forces trying to encircle the towns and reach the administrative border of the Luhansk region, the General Staff of the Ukrainian Armed Forces said in a statement. Russian troops have continued shelling and are amassing forces to resume their offensive near Zaporizhzhia.

Russia’s Deputy Prime Minister Alexander Novak will have meetings with Iranian officials about trade and transport when he visits Tehran on Wednesday, the semi-official Mehr news agency reported, citing an Iranian minister.

Rostam Ghassemi, Iran’s roads minister, said they intend to discuss the transit of goods from Russia to Asian markets like India, via Iran, according to Mehr.

Germany plans to reactivate coal and oil power plants if Russian President Vladimir Putin decides to cut off gas exports to the country.

Economy Minister Robert Habeck will present an emergency decree on Tuesday that will enable the government to reactivate plants that were supposed to be shut-off in line with Germany’s coal exit plan.

“This means that the short-term use of coal-fired plants in the electricity sector is made possible on demand, should the need arise,” according to the decree seen by Bloomberg.

Russia’s currency extended a rally that’s taken it to the strongest level versus the dollar in four years, prompting a warning from one of President Vladimir Putin’s staunchest allies that the gains may be overdone.

The ruble was stronger for a fifth day against the dollar, trading up as much as 2.2%, even after Russia on Monday loosened capital controls by reducing the amount of foreign currency exporters are required to convert.

The Russian currency is by far the best performer globally this year with a gain of about 30% against the dollar. But its recovery since the invasion of Ukraine has been so rapid that economists are warning that the appreciation will batter budget revenue and hamper exporter competitiveness.

Russia is not chasing any deadlines in Ukraine and will push on til it meets all its objectives, Interfax quoted Nikolai Patrushev, Russia’s Security Council Secretary, as saying.

Patrushev also warned that Russia would take Finland and Sweden joining NATO as a direct threat to its security and would have to react. Turkey has so far blocked plans to expand the defense alliance.

European natural gas prices rose, with the market focused on potential further disruptions to supplies, even as stockpiles rise.

Benchmark Dutch front-month futures halted three sessions of losses, rising as much as 3.6%. The contract in recent days has traded near levels just prior to Russia’s invasion of Ukraine in late February.

Traders remain focused on interruptions to supplies from Russia, Europe’s biggest provider. The country cut flows to Finland last week and to Poland and Bulgaria last month, due to a dispute over payments.

The finance ministers of Estonia, Latvia, Lithuania and Slovakia urged the European Commission in a joint statement to allow the use of Russia’s frozen assets to pay for Ukraine’s reconstruction.

“The reconstruction of Ukraine will require enormous funds,” said Lithuanian Finance Minister Gintare Skaiste. “Russia must be held accountable for its actions and pay for the damage caused.”

Russian-installed occupation authorities in Ukraine’s Kherson region will appeal to Moscow to build a permanent military base there, RIA Novosti reported, the latest step toward making their takeover permanent.

RIA Novosti quoted Kirill Stremousov, deputy chief of the occupation regime, as saying they would request a base be built to ensure security. Moscow so far has announced no plans for permanent military presence in the territories it’s taken in the invasion, but the Kremlin is laying plans to integrate them closely with Russia.

Stremousov reiterated that the occupation authorities plan to appeal for Russia to annex the region, aiming to complete preparations by the end of the year to hold a referendum on the issue.

Ukraine has vowed to restore control over the territory that Russian forces have taken since the start of the Feb. 24 invasion.

Russia’s largest refiner’s primary throughput was down by nearly 28% in the first days of May compared with prewar levels, according to Bloomberg calculations based on industry data.

Rosneft PJSC’s chief executive officer, Igor Sechin, has been in Putin’s inner circle for decades, and the company’s subsidiaries account for about two-thirds of Russia’s production cuts since the invasion of Ukraine, data from the Energy Ministry show.

Biden said at the opening of a leaders’ summit in Tokyo among fellow Quad members Australia, India and Japan that Russia’s “brutal and unprovoked war against Ukraine has triggered a humanitarian catastrophe.”

“It appears to me that Putin is just trying to extinguish culture,” Biden said, adding, “he’s not even aiming at military targets anymore.” Biden is seeking support from Quad leaders as they battle the fallout the war that has rattled economies and caused a food crisis.

Britain is in talks with allies about sending warships to the Black Sea to protect freighters carrying Ukrainian grain, The Times of the UK reported. The foreign ministers of Lithuania and the UK discussed the idea to break Russia’s blockade that could include NATO countries reliant on grain, it said.

Lithuanian Foreign Minister Gabrielius Landsbergis told the Guardian newspaper this week his country was seeking a naval coalition “of the willing” to lift the Russian Black Sea blockade on Ukrainian grain exports.