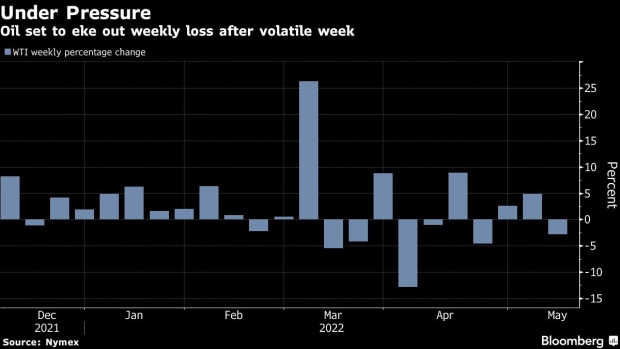 (Bloomberg) -- Group of Seven foreign ministers continue talks in Berlin and will be joined over the weekend by NATO officials as Finland and Sweden prepare to announce possible bids to join the military alliance. Moscow has said it will step up defenses along its long border with Finland if the latter moves ahead with plans to join NATO.

Some EU nations say it may be best to consider delaying a push to ban Russian oil so they can proceed with the rest of a planned sanctions package while continuing to try getting Hungary, and its Prime Minister Viktor Orban, on board.

Russian forces continued to attack Mariupol’s Azovstal plant with artillery and airstrikes overnight, according to a Ukrainian military update.

Red Cross representatives were in Russia Thursday to discuss the evacuation of heavy wounded Ukrainian soldiers from the steel complex, said Ukrainian Deputy Prime Minister Iryna Vereshchuk. Late Thursday she said the United Nations was also involved, and that Turkey has agreed to be a middleman. Ukraine wants to sign a document on how evacuation will transpire, she said.

Kyiv said Russia is relocating artillery to the Bryansk region as a potential staging point for renewed shelling of Ukraine’s Chernihiv region.

Ukrainian forces successfully prevented an attempted Russian river crossing in the Donbas, the U.K. military said in an intelligence update.

The U.K. termed such crossings in a contested environment “a highly risky maneuver and speaks to the pressure the Russian commanders are under to make progress in their operations in eastern Ukraine.”

Russian forces may be abandoning efforts at a “wide encirclement” of Ukrainian troops along the Izyum-Slovyansk-Debaltseve line in favor of shallower encirclements of Severodonetsk and Lysychansk, according to U.S.-based analysts at the Institute for the Study of War.

Oil advanced for a third day, bookending another tumultuous week of trading as investors weigh the prospect of a EU ban on Russian crude imports and uncertainty over China’s virus resurgence.

West Texas Intermediate futures rose above $107 a barrel. Some EU nations said the bloc may have to consider delaying the ban on Russian oil if it can’t get Hungary to agree on the embargo.

The company, one of the world’s largest tanker operators, is selling vessels to repay loans to Western banks, the newspaper said. It is also in talks with China Merchants Group Ltd. to sell other ships. Sovcomflot said in a written statement that it’s selling “aging facilities as well as vessels, the usage of which seemed to be impossible due to restrictions imposed against the Russian commercial fleet,” the paper said.

Read more: Sovcomflot Says It Plans to Sell Part of Its Fleet

Russia’s ambassador to the EU Vladimir Chizhov said plans by Finland and Sweden to join NATO will “necessitate certain military-technical measures, like improving or raising the degree of defense preparations along the Russian-Finnish border.”

Joining NATO “has never made any country more secure,” Chizhov said in an interview with the UK’s Sky News. He also said he was “sure” there would be a negotiated solution to the war in Ukraine that would see the country become a neutral state and recognize the Donbas republics and Russia’s annexation of Crimea. Ukraine says it’s open to neutrality but won’t concede any territory.

The US Senate was forced to postpone final passage of a $40 billion Ukraine support package after Rand Paul refused to allow the vote unless a provision to appoint an official with oversight powers for the aid was included.

Paul, a Kentucky Republican, said that US deficit-spending in order to support Ukraine could further stoke soaring inflation. The Senate, where work can be slowed by objections from one senator, is now expected to vote on the legislation and send it to President Joe Biden’s desk for his signature next week.

Some EU nations are saying it may be time to consider delaying a push to ban Russian oil so they can proceed with the rest of a proposed sanctions package if the bloc can’t persuade Hungary to back the embargo.

Governments are still aiming for a deal on the full package, including a phased-in oil ban, by Monday, when EU foreign ministers meet in Brussels, according to EU diplomats. The idea of putting off the move against Russian oil, which Hungary has said would be too damaging to its economy, is gaining support, the diplomats added.

The US will soon begin a “major initiative” alongside the EU and the UK to help Ukraine document potential war crimes and human rights abuses committed during Russia’s invasion, Beth Van Schaack, the State Department’s ambassador-at-large for global criminal justice, told the Senate Foreign Relations Committee.

Van Schaack appeared remotely from a conference in the German city of Nuremberg, where Nazi leaders were tried after World War II. “This is another Nuremberg moment,” she told senators. “There’s a global consensus that Russia’s conduct is intolerable and that those responsible for atrocities must be held accountable.”

“Twenty-five million tons of grain are blocked in Ukrainian ports, especially in Odesa,” German Foreign Minister Annalena Baerbock said at the opening of the G7 foreign ministers’ meeting in Weissenhaus in Northern Germany. “This is grain which is urgently needed as food in African countries and the Middle East.”

Accusing Russian President Vladimir Putin of using grain to further divide the global community, Baerbock said, “We must stand together in the face of this food crisis.”

Wheat futures in Chicago rose after a US Department of Agriculture report said production in Ukraine, one of the world’s biggest growers, will drop by one-third compared to last season.

Ukraine is in “very difficult negotiations” to evacuate seriously wounded fighters from the Azovstal steel plant in the city of Mariupol as part of a swap for captured Russian soldiers, Deputy Prime Minister Iryna Vereshchuk said.

Ukraine evacuated all civilian women, children and the elderly from Azovstal, where they were hiding for weeks under Russian bombardment. Mariupol, home to almost 500,000 people before the war, has been under siege since March 1.

The cut is a result of sanctions by Russia announced late Wednesday and is seen as a retaliation against Germany for sanctions over the war in Ukraine and for the seizure of Gazprom PJSC’s units in April. The German government took control of them to secure Europe’s gas supply and is now in talks to finance them.