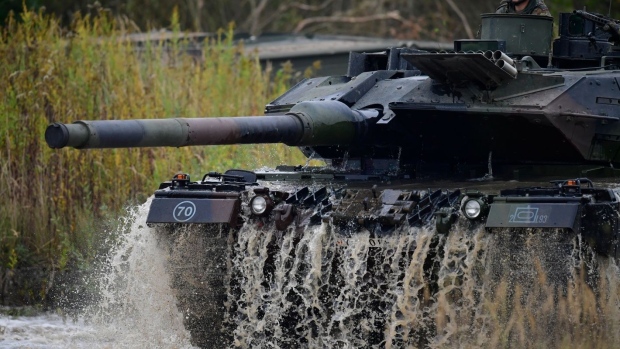 (Bloomberg) -- The US is set to announce it will send M1 Abrams battle tanks to Ukraine, people familiar with the matter said, reversing a longstanding position as part of efforts to persuade Germany to provide tanks of its own.

Chancellor Olaf Scholz is talking to allies about supplying Ukraine with Leopard battle tanks and could give the green light to ship them in the next few days, according to Germany’s defense minister.

Both announcements could come as soon as Wednesday, according to people familiar with the decisions. NATO Secretary General Jens Stoltenberg said allies “need to enable the Ukrainians fast” ahead of an expected Russian offensive.

Ukrainian President Volodymyr Zelenskiy dismissed at least 10 officials in a government shakeup following an outcry over perceived excesses by civil servants amid the country’s efforts to fight off Russia’s invasion.

Ukrainian forces downed three Russian Ka-52 helicopters in the eastern Donetsk region and Russian Su-25 aircraft near Bakhmut, the General Staff said on Facebook. Russian troops launched nine missile strikes at settlements in the Kharkiv, Donetsk and Zaporizhzhia regions over the past day, and conducted 27 air attacks and 79 assaults with multiple-launch rocket systems, the General Staff said earlier. According to its morning statement, Russian forces are continuing an offensive on the Bakhmut and Avdiyivka axes north of Donetsk, while all attacks in the direction of Kupyansk were repelled.

Even as the US and Poland prepared to send battle tanks to Ukraine, Zelenskiy underscored how vital the armored weapons could be to success against the Russian invaders.

“A lot has been said about tanks,” the president said in his nightly video address on Tuesday. “There are many efforts, words, promises. It is important however to see the reality. It is not about five, or ten, or fifteen tanks. More is needed. And we are doing everything every day to cover for this shortage.

“I thank everyone who supports us in this, Zelenskiy added. “Discussions however have to be followed by decisions how to strengthen our defense.”

US Set to Send Ukraine Its Abrams Battle Tank in Major Reversal (7:15 p.m.)

The Biden administration is set to announce it will send M1 Abrams battle tanks to Ukraine, people familiar with the matter said, reversing a longstanding position as part of efforts to persuade Germany to provide tanks of its own.

The people, who asked not to be identified discussing private deliberations, said the White House could make the announcement as early as Wednesday.

Sending the Abrams would mark a reversal for an administration that has insisted the tank doesn’t make sense for Ukraine because it requires a special type of fuel, is too heavy and requires too much maintenance and training. But Germany has been wary of providing its Leopard 2 battle tank unless allies do the same, and offering Abrams tanks is seen as the quickest way to ease Berlin’s concerns.

On Tuesday, Der Spiegel said Germany will send its Leopard tank to Ukraine. The Wall Street Journal earlier reported the Biden administration was leaning toward providing Abrams tanks to Ukraine.

Italy’s parliament gave final approval to a decree that allows the government to send more weapons to Ukraine. The law is a crucial for Prime Minister Giorgia Meloni to fulfill a promise to send additional equipment to Kyiv.

While details of the shipments are classified, the Italian government is planning to provide equipment including the anti-missile system SAMP/T, government officials have said.

Germany to Give Poland OK This Week to Send Tanks to Ukraine (4:29 p.m.)

Germany is expected to give consent as soon as Wednesday after a Polish request to deliver Leopard tanks, according to people familiar with the matter, who asked not to be identified because the decision is private.

Poland formally requested the authorization earlier Tuesday and the German government said it would respond with the necessary urgency. German law requires approval for the re-export of its military equipment, meaning the hundreds of Leopard tanks in Europe can only be sent to Ukraine with Berlin’s consent.

US Leans Toward Providing Abrams Tanks to Ukraine: WSJ (4 p.m.)

President Joe Biden’s administration is leaning toward sending a “significant” number of Abrams M1 tanks to Ukraine, the Wall Street Journal reports, citing unidentified US officials. An announcement could come this week, the newspaper said.

Zelenskiy’s Call for Justice Triggers Shakeup in His Government (2:40 p.m.)

Days after giving a speech in which he used a Ukrainian term meaning “justice” or “fairness” 10 times in four minutes, Zelenskiy’s administration announced the dismissal of four deputy ministers and five regional governors. Several other officials announced they would step down.

The departures follow a public outcry on social media over reports that some officials had traveled abroad to destinations including Spain for the New Year holiday. In one case, a spokeswoman for the Ukrainian border service was criticized for going to Paris while her colleagues fought Russian forces in the trenches of eastern Ukraine.

The Ukrainian leader said he’d be “surprised” if Belarusian armed forces joined the invasion, since most of the northern neighbor’s population is unwilling to participate in Russia’s war – and Kyiv has no plans to attack, he told reporters.

The comments were in response to an earlier remarks by Belarusian President Alexander Lukashenko, who asserted that Ukraine was seeking a “non-aggression pact” with Belarus, according to state-owned news agency Belta.

People who choose to support the initiative can post pictures of themselves wearing leopard-print clothing. The campaign, which started Sunday on Ukraine’s official Instagram page, has already garnered more than 5 million views, according to the ministry.

--With assistance from Chris Reiter.