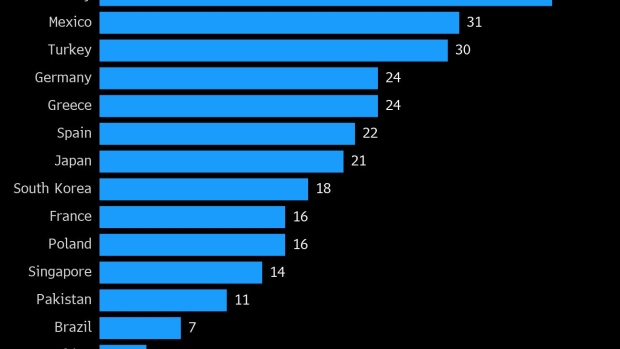 (Bloomberg) -- Ukraine’s government has indicated it needs up to $65 billion this year to meet its funding requirements as it faces continued economic and budgetary disruption from Russia’s invasion, billions more than its allies have so far been able to pledge.

With Luhansk largely under its control, Russia’s military is switching its focus further west into Donetsk, which is facing intense bombardment. Ukraine is relying on Elon Musk’s Starlink satellite Internet system to keep areas affected by the invasion, including the front lines, connected, Ukraine’s minister for digital transformation said.  More than 13,000 devices are operating in the country and officials are in touch with Musk representatives daily.

With Lysychansk under its control, Russia is switching its focus further west into Donetsk, intensifying shelling of the region, according to Ukrainian officials. Fighting continues on the Bakhmut axis, which has emerged as a new flashpoint. Ukrainian forces repelled a Russian assault close to Slovyansk, the Ukrainian General staff said, with the city’s mayor urging residents to evacuate as the front line moves closer. Russia fired seven missiles further west toward Dnipropetrovsk overnight, six of which were shot down by Ukrainian forces, Valentyn Reznichenko, the head of the regional government, said on his Telegram account. One rocket hit the town of Pokrov, destroying several houses, according to the preliminary data.

Elon Musk’s satellite Internet service Starlink has been vital in keeping parts of Ukraine affected by the Russian invasion, including the front lines, connected, the country’s minister for digital transformation, Mykhailo Fedorov, said in an interview with Bloombverg TV.

There more than 13,000 Starlink satellite Internet devices operating in Ukraine and Ukrainian officials are in daily contact with Musk’s representatives, Fedorov said.

Russian imports picked up a bit in May, even from some countries that have joined the US and its allies in imposing sanctions over the Kremlin’s invasion of Ukraine, as the economy showed signs of stabilizing.

Trade flows into Russia still remain far below pre-invasion levels, but imports for the five major trading partners were down 29% in May on year, compared with a 43% drop in April. Bloomberg calculated the figures based on reports from those countries, which account for about half of Russian imports. Russia stopped releasing detailed trade data after the invasion.

Turkey, which hasn’t joined the sanctions, saw exports to Russia jump to the highest since December.

Russian billionaire and major Nornickel shareholder Vladimir Potanin confirmed he is ready start discussion of potential merger with Rusal, according to an RBC interview. Potanin said Rusal proposed the tieup.

Among the buyers he named are Iraq and Saudi Arabia. One of the largest contracts of 150,000 tons of grain is with Iran.

Natural gas is the hottest commodity in the world right now and the war in Ukraine has pushed great power competition for supplies to new levels. Gas is a key driver of global inflation, its price rising some 700% in Europe since the start of last year and pushing the continent to the brink of recession.

It now rivals oil as the fuel that shapes geopolitics, so much so that plans to fight climate change are getting relegated to the back-burner.

Russia is cutting back on pipeline deliveries to Europe — which says it wants to stop buying from Moscow anyway, if not quite yet. The scramble to fill that gap is turning into a worldwide stampede, as countries race to secure scarce cargoes of liquefied natural gas ahead of the northern-hemisphere winter.

The EU Parliament vote is set to take place Wednesday, and was supposed to mark the easy passage of a New Year’s proposal by the European Commission to include gas and nuclear energy in the bloc’s so-called green taxonomy. But Putin’s invasion -- and the energy crisis it fanned -- has upended that process.

Just last week, Ukraine’s ambassador to Germany called on lawmakers to reject the Commission’s proposal, warning that it would benefit Russia and perpetuate European reliance on its gas supplies.

Ukraine Estimates Immediate Funding Needs of Up to $65 Billion (8:51 p.m.)

Ukraine has indicated it needs up to $65 billion this year to meet its funding requirements, billions more than its allies have so far been able to pledge.

The amount needed immediately includes so called macro-financial stability assistance for emergency budget funding and logistics infrastructure projects. The figure, which excludes defense and security spending, is part of a larger blueprint for the nation’s longer term reconstruction, which is estimated to exceed $750 billion and was unveiled at a conference in Lugano.

“Right after the war is over and Ukraine achieves victory, we need to implement thousands of rebuilding projects,” Prime Minister Denys Shmyhal said at the conference.