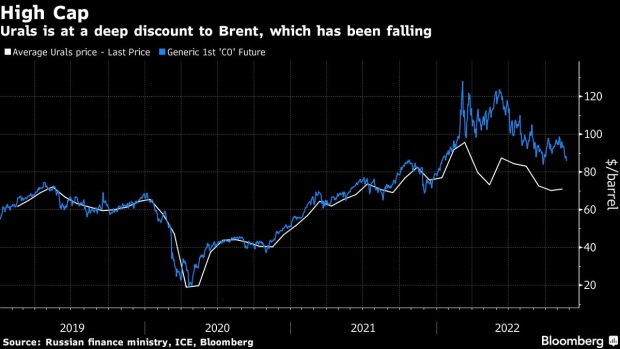 President Volodymyr Zelenskiy said in an evening address that 15 regions were experiencing problems with water supplies, while the situation with power was difficult across the whole country.

Russian President Vladimir Putin is due to meet with wives and mothers of mobilized and volunteer soldiers serving in Ukraine, as the Kremlin faces growing pressure to improve their treatment after his invasion reached the nine-month mark.

Seven people died and 21 were injured in Russian shelling of the liberated southern city of Kherson on Thursday evening, regional Governor Yaroslav Yanushevych said on Telegram. Russian forces also struck Zaporizhzhia’s suburbs, according to local authorities. Over the past day Ukrainian troops repelled assaults near 11 settlements in the Donetsk and Luhansk regions in the east, Ukraine’s General Staff reported in a regular update.

Half of Kyiv Residents Remain Without Power (8:49 a.m.)

Half of the capital’s residents have no electricity, though central heating has already been provided to about one-third of the city’s buildings, Mayor Klitschko said on Telegram.

All users in Kyiv should have electricity supplied to them for three hours on Friday, he said.

Power in Ukraine’s second-largest city has been fully restored, Regional Governor Oleh Syniehubov said on Telegram. At the same time, nearly 100,000 residents of the Kharkiv region remain without power, he said.

Russian forces attacked areas in the region with artillery and S-300 missiles, the governor said.

A cap on Russian crude at $65-$70 per barrel would pose little downside to current realized prices and could even equate to a $3-$4 upside to Urals, based on where Brent is now trading, according to industry consultant FGE. A price cap in that range would do little harm to Russia’s oil export, the FGE analysts said.

Zelenskiy said 15 regions were experiencing problems with water supply, as the provision of power remain difficult across the nation. The Ukrainian leader met with key security officials to discuss how to maintain communications in the country.

Zelenskiy also said he was receiving regular reports about Russian forces shelling Kherson after they recently pulled out.