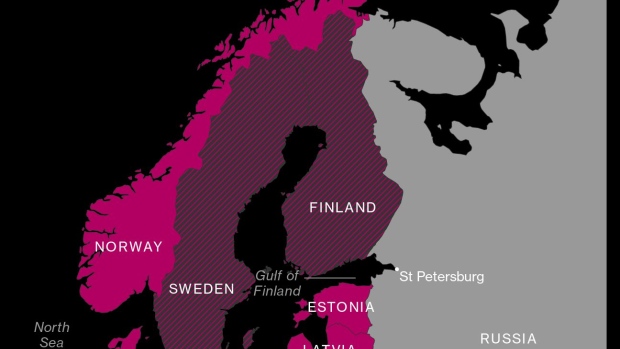 NATO foreign ministers had a frank discussion with Turkey regarding the possible accession of Sweden and Finland. The Nordic countries are expected to announce bids on Sunday to join the military alliance. Russian President Vladimir Putin told Finland’s leader that joining NATO would be a mistake.

Top NATO officials meet in Berlin on Sunday from 9 a.m. local time, while the NATO Secretary General and Germany’s foreign affairs minister will hold a press conference at 2:30 p.m. Sweden and Finland have separate press briefings.

The European Union is offering gas importers updated guidance on how to buy fuel from Russia without breaching EU sanctions. President Volodymyr Zelenskiy met top Senate Republicans in Kyiv on Saturday and urged the speedy package of aid to Ukraine.

NATO Has Frank Discussions With Turkey on Accession (8:07 a.m.)

NATO’s deputy secretary general said that the alliance’s foreign ministers had a frank talk with Turkey regarding the possible accession of Sweden and Finland. Turkey has raised concerns over the process, accusing Sweden and Finland of giving backing to what it says are Kurdish “terrorists.”

“I’m confident if these two countries will decide to seek membership in NATO that we will be able to welcome them and to find all conditions for consensus to be met,” Mircea Geoana told reporters on Sunday.

Canadian Foreign Minister Melanie Joly said a quick accession process was important, noting “disinformation campaigns that are going on in Finland and Sweden” as well as unspecified “security concerns.”

With Putin’s invasion of Ukraine stalling, other former Soviet states are weighing prospects for pulling away from Moscow’s orbit even as they fear risks of potential border conflict.

The war is sending tremors along an arc of instability stretching from Ukraine’s neighbor Moldova through the Caucasus and into Kazakhstan in central Asia. Putin’s intentions have become an urgent national security question in countries with so-called “frozen conflicts” or that have large pro-Russian minorities.

UniCredit SpA and Citigroup Inc. are considering swapping assets with Russian financial institutions as they try to exit the country while avoiding large writedowns on their operations there, the Financial Times reported.

The banks have explored deals to swap their Russian businesses for the local buyer’s foreign units, people with knowledge of the plans told the newspaper. UniCredit is also working on deals with non-sanctioned banks to swap its Russian loan books for their foreign credit portfolios, according to the report.

The Ukrainian band Kalush Orchestra won the Eurovision Song Contest in a show of support for the war-torn nation, the Associated Press reported. The public vote from home was decisive in securing the band’s victory, according to the report.

Front man Oleh Psiuk made a plea to the live crowd and television audience of millions for the remaining Ukrainian fighters trapped in the Azovstal steel plant to be freed, AP said. Ukrainian President Volodymyr Zelenskiy celebrated the victory in a Telegram post, saying that Ukraine will host the contest next year and hopes to “one day” host participants and guests in Mariupol.

US authorities are alleging that a Russian tycoon acted as the “straw owner” of two yachts worth more than $1 billion, including the $700 million Scheherazade, a superyacht linked to Putin.

Court filings in the South Pacific island of Fiji, where the US is trying to seize the $325 million yacht Amadea, reveal what US officials allege is a nest of offshore shell companies that were set up with the help of a yacht broker to conceal the true owners of both vessels — an allegation that lawyers for the listed owner and the broker dispute. A hearing is scheduled for Wednesday in Fiji on the fate of the Amadea.

The layers of companies and trusts, stretching from the Marshall Islands to Switzerland, indicate the beneficial owner of both yachts is the former president of state-controlled Rosneft OJSC, Eduard Khudainatov, according to the documents. Khudainatov doesn’t appear on any sanctions lists.

The European Union is set to offer gas importers a solution to avoid a breach of sanctions when buying fuel from Russia and still effectively satisfy President Vladimir Putin’s demands for payment in rubles.

In new guidance on gas payments, the European Commission plans to say that companies should make a clear statement that they consider their obligations fulfilled once they pay in euros or dollars, in line with existing contracts, according to people familiar with the matter. The EU’s executive arm told the governments that the guidance will allow them to purchase gas without breaching EU sanctions.

The clock is ticking because many firms have payment deadlines this month. If they don’t pay, gas flows could be cut off.

Turkish Foreign Minister Mevlut Cavusoglu criticized Sweden and Finland for supporting the Kurdistan Workers’ Party, or PKK, ahead of a meeting with his NATO counterparts. “If a country is going to be a NATO member, it should not support terror organizations,” he said.

“These countries are supporting terrorists and that is why a majority of Turkish people are against their membership,” Cavusoglu said.

Asked about the comments, Luxembourg Foreign Minister Jean Asselborn said “none of the 30 allies should be allowed to resist” membership for Sweden and Finland if they want to join. “It’s a game that would place NATO in a bad light, so I hope it won’t be the case,” he told reporters.

Finnish Foreign Minister Pekka Haavisto said he’s confident his country and Sweden will become NATO members “in the end.” He spoke with reporters in Berlin on Saturday before a meeting with foreign ministers of the alliance.

Asked about potential Turkish opposition, Haavisto said that “every member country of NATO, of course, has the possibility of prolonging the process.” Turkish President Recep Tayyip Erdogan on Friday expressed his government’s concern about Finland and Sweden joining NATO.

Haavisto stressed Helsinki’s intention to maintain a peaceful border with Russia and to keep the line of communication open. “We don’t ask for permission, but we communicate,” he said. Finland’s president earlier spoke with Vladimir Putin to inform the Russian leader of the rationale behind the country’s interest in NATO.

Minority Leader Mitch McConnell led a delegation of US Republican senators to Kyiv, where they met with Ukrainian President Volodymyr Zelenskiy on Saturday.

Senators Susan Collins of Maine, John Barrasso of Wyoming and John Cornyn of Texas were with McConnell, according to a photograph released by Zelenskiy’s office.