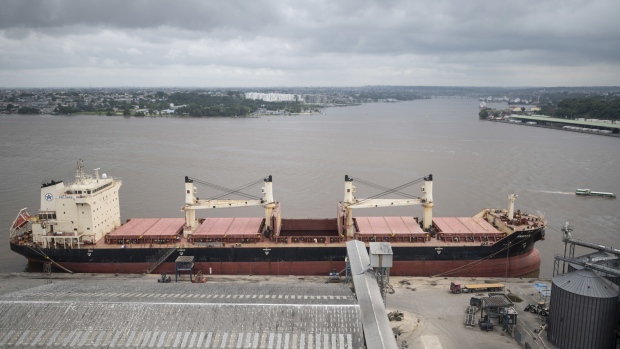 A container ship after unloading wheat in Abidjan, Ivory Coast, on June 29. , Bloomberg

(Bloomberg) -- Ukraine plans to unveil a blueprint for rebuilding the country that could mobilize hundreds of billions of euros as the nation continues to grapple with Russia’s invasion. European officials worry that Russian disinformation on the source of food shortages is gaining traction in Africa.

Russian forces are making an all-out attempt to capture Lysychansk, Kyiv’s last major foothold in the eastern province of Luhansk.

Global oil prices could reach a “stratospheric” $380 a barrel if US and European penalties prompt Russia to inflict retaliatory crude-output cuts, JPMorgan Chase analysts warned. Russia has reduced gas exports to Italy by 15% from normal levels, an Italian official said.

Russia continues to focus on Lysychansk, amassing troops and equipment in a bid to capture the last major city in the Luhansk region still under Kyiv’s control. Pro-Russian separatist officials said Saturday that Ukraine’s forces in the city had been surrounded; Ukrainian officials said the city’s not encircled and fighting continues. In the Kharkiv region, Russian troops are looking to regain their positions near Ukraine’s second largest city, lost during a counteroffensive early in the war, according to the military staff in Kyiv.

President Volodymyr Zelenskiy said the rebuilding plan that Ukraine plans to unveil in Lugano from Monday will be “reconstruction in the broadest sense of the word.”

“It is necessary not only to restore everything that the occupiers destroyed, but to create a new basis for our life, for Ukraine -- safe, modern, convenient, barrier-free,” Zelenskiy said Saturday in his nightly address to the nation.

“Implementing such a large-scale project across the country, providing new safety standards and a new quality of life is possible only by attracting international opportunities,” he said.

Senior officials in Brussels are in talks on the creation of an EU-wide sanctions authority with enforcement powers similar to the US Treasury’s Office of Foreign Assets Control, the Financial Times reported.

Another option would be to give increased power to the EU’s planned Anti-Money Laundering Authority, the newspaper said. The goal would be to address uneven enforcement of sanctions across the bloc’s 27 member states.

European governments have been alarmed by a Russian disinformation campaign that seeks to deflect criticism that President Vladimir Putin’s war with Ukraine risks leaving millions of people in Africa facing famine.

Moscow’s diplomats have persistently push the narrative that Western sanctions, rather than Russian blockades, have caused food shortages in Africa -- and EU and UK officials say the message is gaining traction.

Ukraine plans to put forward a blueprint this week for rebuilding the country that could mobilize hundreds of billions of euros, even as the nation grapples with a Russian invasion that’s destroyed cities, shredded the economy, and displaced millions.

The plan, around 2,000 pages, will be introduced at a conference in Lugano, Switzerland, that starts Monday, said people familiar with the outline. It will map out a broad list of infrastructure and security projects, investments in climate and the digital economy, as well as diversification of energy resources.

European Union officials have said the 27-member bloc will contribute the bulk of overall financial assistance, a volume that could surpass 500 billion euros ($523 billion). Ukraine’s government thrashed out the draft with donors, including the EU, who will provide feedback over the coming months, the people said on condition of anonymity because the discussions were not public.

Japanese Prime Minister Fumio Kishida said he will consult local firms to better assess the impact of a decree by President Vladimir Putin that transferred rights to the Sakhalin-2 gas project to a new Russian company.

Kishida reiterated that the move won’t immediately halt the supply of liquefied natural gas to Japan.

Germany should prepare for deeper cuts in Russian gas supplies because Putin is pursuing a conscious strategy of driving up prices to undermine European unity, Economy Minister Robert Habeck said.

German leaders are stepping up warnings of impending turmoil and natural-gas shortages in Europe’s biggest economy, which relies on Russia for about one-third of its energy. German utilities are at risk of cascading failures that might require activating a legal clause that would allow them to pass on price increases outside of contract commitments, Habeck said.

Ukraine’s foreign minister said he spoke with EU foreign affairs chief Josep Borrell, to coordinate positions ahead of the G-20 foreign ministers meeting starting in Bali on Thursday. The pair is “working on” a seventh EU sanctions package on Russia, Dmytro Kuleba said.

Borrell said officials at the G-20 gathering will “address impacts of the global food crisis” caused by Russia’s invasion of Ukraine.

Russian-backed separatist officials said Lysychansk in eastern Ukraine’s Luhansk province has been completely encircled, according to Interfax. Ukraine denies the city has been surrounded.

“Fighting rages around Lysychansk,” said Ruslan Muzytchuk, a spokesman for the Ukrainian National Guard. “The city has not been encircled and is under control of the Ukrainian army.”

Luhansk Governor Serhiy Haidai said Moscow’s troops were making an all-out effort to take control of strategic city. “Over the last day, the occupiers opened fire from all available kinds of weapons,” he said on Telegram.

Kyiv’s ambassador asked Turkey to detain a Russian-flagged ship believed to be carrying Ukrainian grain from the occupied city of Berdyansk. “I am convinced that the decisions made will precede attempts to violate the sovereignty of Ukraine!” Vasyl Bodnar wrote on Facebook.

The Kazakh-owned Zhibek Zholy is believed to be carrying 7,000 tonnes of grain loaded after the port, occupied by Russian troops, reopened following a mine-clearing operation.

Yevgeny Balitsky, head of occupation authorities in the Zaporizhzhia region, was quoted by Tass this week saying the cargo was headed for “friendly countries” under the protection of Russia’s Black Sea fleet.

Russia has reduced gas exports to Italy by 15% from normal levels, Italy’s ecological transition minister Roberto Cingolani told SkyTg24. Cingolani said he expects prices to rise further after a planned closure for maintenance of the Nord Stream pipeline, but added that filling gas storage to 90% by the winter remains a “feasible” target.

Italy’s government on Thursday approved a 4-billion-euro loan to energy market operator GSE to facilitate the purchase of gas by companies on the open market. The energy crunch is being compounded by a drought that will reduce Italy’s hydro power output by 60% by the end of the year, the head of the association of hydroelectric producers said in an interview with Il Sole 24 Ore.

Moscow’s troops have likely reverted to Soviet-era “Kitchen” missiles that are “less accurate and unsuitable for precision strikes, and have almost certainly repeatedly caused civilian casualties in recent weeks.”

The comment came a day after Russia said it had drafted a new law to help ramp up munitions production.