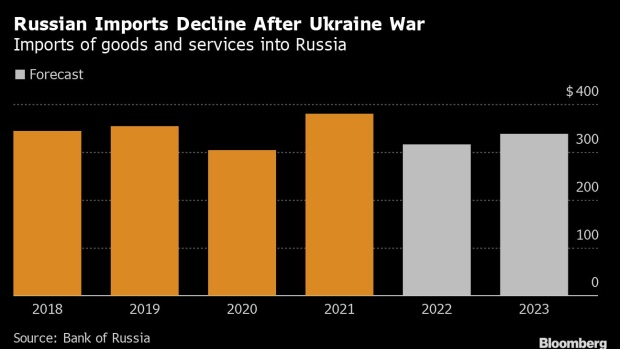 (Bloomberg) -- Ukraine’s parliament voted to extend martial law and military mobilization by another 90 days through Nov. 21, measures put in place after Russia invaded the country on Feb. 24.

President Volodymyr Zelenskiy’s administration also plans to reintroduce a fuel tax as it seeks to boost budget revenue for social and infrastructure projects.

The plan, which still needs parliamentary approval, comes as Russian forces continue to shell cities and towns in east Ukraine, including Kharkiv.

Russian forces shelled Kharkiv, Ukraine’s second-largest city, again on Monday, wounding five people in a residential area, local authorities said. Fighting continues in Ukraine’s eastern Donbas region. Ukraine’s military said Russian heavy vehicles can’t use bridges across the Dnipro River to resupply troops in occupied Kherson due to shelling. The country’s Southern Operational Command has been targeting Russian communication lines as it presses a counteroffensive there, according to the US-based Institute for the Study of War.

The parliament in Kyiv approved increased budget spending for the military, raising total security and military expenditure to 1.2 trillion hryvnia ($32.8 billion) this year.

Ukraine plans to reintroduce an excise tax on fuel, including diesel and gasoline, as the government seeks to get an additional 2 billion to 3 billion hryvnia in budget revenue a month, Infrastructure Minister Oleksandr Kubrakov said in a televised briefing.

The government scrapped the tax after Russia invaded Ukraine. The revenue will be used to finance social spending and infrastructure projects.

Russian forces are “step-by-step liberating” the Donbas region of Ukraine and continue to fulfill their goals, President Vladimir Putin said at the opening of the Army-2022 military exhibition outside Moscow.

Even as Russia faces a deepening economic impact from sanctions imposed over his war, Putin said his country has many allies that won’t buckle to what he called “the hegemon.”

Ukrainian parliament backed bills that extend martial law and mobilization by another 90 days through Nov. 21.

Russia’s Promsvyazbank opened up an office in an occupied city in the Kharkiv region, Interfax reported, citing the lender’s press service.

The sanctioned bank, which finances Russia’s military-industrial complex, opened an office in Kupiansk that will offer services to consumers and businesses, Interfax said.

Promsvyazbank earlier announced that it would provide banking services to the self-declared Donetsk and Luhansk people’s republics, which are also occupied by Russian forces.

Russian efforts to keep up the flow of unauthorized imports are having only limited success as the country tries to cope with international sanctions that have caused an exodus of foreign companies and occasional shortages.

Gray market sales, also known as parallel imports, reached nearly $6.5 billion since the government allowed companies in May to bring in goods without gaining agreement from their manufacturers, Deputy Prime Minister Denis Manturov said in an interview with the Interfax news service. They may total $16 billion this year, he said.

Shipments of foreign goods collapsed under the weight of sanctions from the US and its allies in response to Putin’s invasion of Ukraine.

Russia’s payment to Ukraine for natural gas transit this month has gone through without problems, even after a glitch with a similar oil transaction, according to people familiar with the situation.

State-run Gazprom PJSC sent its regular monthly payment to Ukraine’s NJSC Naftogaz Ukrainy last week and it has been accepted, according to people on both sides, who asked not to be named as the information isn’t public.

Traders were on edge about possible disruptions after shipments through one branch of the Druzhba oil pipeline were halted in early August because a financial transfer from Russia to Ukraine was snarled.

Latvia’s Justice Ministry is drafting legislation that would limit the use of Russian in the private and public sector, Minister Janis Bordans told the Delfi website in an interview.

The proposals, which would still need approval by the government and parliament, would restrict the use of non-EU languages in bank communications and corporate phone messages to consumers, as well as in requirements for job applications.

Two vessels were cleared to proceed to Chornomorsk on Sunday and another three will be inspected for travel to the port on Monday, according to the Joint Coordination Centre that oversees Ukraine’s grain-export corridor.

Another vessel bound for Odesa will be inspected Monday, it said.

Moscow and Kyiv reached a deal last month to open a humanitarian corridor to ship grain from Ukrainian ports, leading to hopes that the exports would ease global food prices.

Poland is working on its own regulations to stop issuing EU visas for Russians, Deputy Foreign Minister Piotr Wawrzyk said in interview with PAP newswire.

Warsaw is in favor of a pan-European ban of issuing visas to Russians that is supported by countries including the Czech Republic, Lithuania and Latvia, but such a rule faces objections from Germany, France and the Netherlands, according to Wawrzyk.

In recent months, Poland has practically stopped giving tourist visas, limiting such to workers such as truck drivers and family members of EU citizens.

No specific dates for the investments were given, and the Saudi firm didn’t respond to questions about whether it still owned them. The value of all those depositary receipts dropped rapidly after the war began, when trading in Moscow was halted and western sanctions were imposed on Russia.