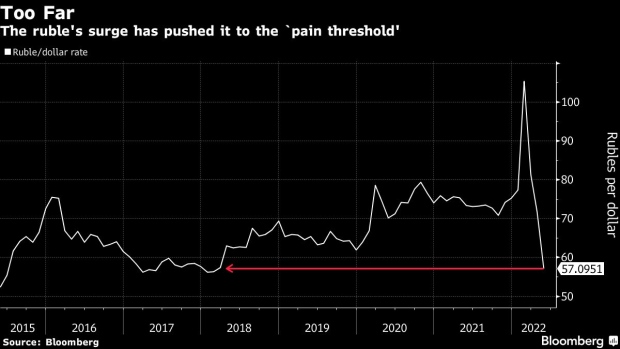 NOVOSELIVKA, UKRAINE - MAY 26: An aerial view shows destroyed houses on May 26, 2022 in Novoselivka, Ukraine. Chernihiv, northeast of Kyiv, was an early target of Russia's offensive after its February 24 invasion. While they failed to capture the city, Russian forces battered large parts of Chernihiv and the surrounding region in their attempted advance toward the capital. (Photo by Alexey Furman/Getty Images) , Photographer: Alexey Furman/Getty Images Europe

(Bloomberg) -- Approaching day 100 of Russia’s war in Ukraine, the US may announce a new package of aid for Kyiv as soon as next week that would include long-range rocket systems and other advanced weapons.

A record volume of Russian oil is on board tankers, with most of that heading to India or China as other nations restrict imports. China’s Unipec has stepped up hiring of tankers this month to transport crude from Russia’s east.

Russia’s efforts to avoid its first foreign default in a century are back in focus on Friday, when investors are supposed to receive about $100 million in interest on Russian debt.

China’s oil trading giant Unipec has sharply increased the number of hired tankers to ship a key crude from eastern Russia as Beijing has emerged as a willing buyer of oil shunned by Europe and the US.

Unipec has chartered at least 10 tankers this month to transport Russian ESPO crude from Kozmino port near Vladivostock for what’s usually a direct, five-day journey to China, according to traders and a shipbroker, a fivefold increase on April.

While a resurgence of Covid-19 has sapped Chinese demand, Russian barrels are typically being sold at a discount, making them attractive to some major consumers.

Russian ground forces continue their bid to surround Severodonetsk and Lyschansk, having recently captured several villages near Popasna, the UK said in an intelligence update. Ukraine so far is denying Russia full control of the Donbas region, it said.

Russian troops continue to advance in the Bakhmut region north of Donetsk and toward nearby Slovyansk, Ukraine’s military said in an update. Ukraine’s foreign minister made an urgent call this week for multiple rocket launch systems for the Donbas campaign.

Between 74 million and 79 million barrels from the OPEC+ producer were in transit and floating storage over the past week, more than double the 27 million barrels just before the February invasion of Ukraine, according to Kpler. Asia overtook Europe as the largest buyer of Russian oil for the first time in April, and that gap is set to widen in May.

The sharp jump in Russian oil in transit by sea underscores how the global energy trade has been thrown into turmoil by the invasion, with US, UK and many EU companies turning their backs on its cargoes and Moscow looking for buyers in Asia. China and India have snapped up millions of barrels to take advantage of hefty discounts.

The path for Russia to keep sidestepping its first foreign default in a century is turning more onerous as another coupon comes due on the warring nation’s debt.

Investors are supposed to receive about $100 million of interest on Russian foreign debt in their accounts by Friday, payments President Vladimir Putin’s government says it has already made.

That’s unlikely to satiate concerned bondholders who are itching to see the cash after the US Treasury closed a loophole that previously allowed American banks and individuals to accept such payments.

The Biden administration is concerned about whether the long-range rocket systems sought by the Ukrainian government could be used for strikes inside Russia, CNN said. The US may be looking to provide shorter-range rocket systems instead, the cable news broadcaster said.

Major leading democracies are considering a plan that would allow Russian oligarchs to buy their way out of sanctions by using their money to rebuild Ukraine, the Associated Press reported, citing government officials familiar with the matter.

The US rejects Russia’s proposal that measures to ease food exports hit by the war should be linked to the removal of sanctions, White House Press Secretary Karine Jean-Pierre told reporters.

Sanctions imposed by the US and allies are “not preventing the export of Ukrainian or Russian agriculture, including food and fertilizer, nor are they preventing the ordinary transactions that are necessary for these exports such as banking or shipping,” Jean-Pierre said. There’s been no discussion of removing the sanctions, she said.

Putin Ties Grain Exports to the Lifting of Sanctions (7:30 p.m.)

Putin said he’s willing to facilitate grain and fertilizer exports as global concern mounts about food shortages and rising prices -- provided that sanctions on his country are eased.

Russia is “willing to make a significant contribution to overcoming the food crisis through the exports of grain and fertilizers on the condition that the West’s politically-motivated restrictions are lifted,” Putin said in a phone call Thursday with Italian Prime Minister Mario Draghi, according to a Kremlin statement. Putin said disruptions to global food supplies were exacerbated by the sanctions imposed by the US and its allies.

The president didn’t specify whether he was referring to Russian exports or those from Ukraine that have been stopped by Moscow’s blockage of ports since its invasion began in late February.

Ukrainian troops in the eastern Luhansk region are coming under constant shelling from the Russians who have established control over about 95% of the territory, Governor Serhiy Haiday -- a Ukrainian official -- said on his Telegram channel. Russia had occupied about 90% of Luhansk last week, he said.

There are over 40,000 civilians in the parts of Luhansk still under Ukrainian control, including nearly 15,000 people in the town of Severodonetsk.

Some “rather powerful” global actors mistakenly believe in appeasing Russia, Ukrainian President Volodymyr Zelenskiy said in his video address to the Latvian parliament.

It is an affront to Ukraine “when they say we have to give up part of our land because this is, allegedly, a required compromise”, Zelenskiy said.

Russia must learn that an aggressor bears the main cost of a war, Zelenskiy said, urging EU to adopt a sixth sanctions package that would include an embargo on the purchase of oil and petroleum products.

The US ambassador to the OSCE warned that Russia could use any territory it controls in Ukraine to launch future attacks on the country.

“For as long as the Kremlin retains control of parts of Ukraine, it will use these territories as a springboard to launch additional attacks and conquer more terrain -- leaving a growing wake of destruction and atrocities,” Michael Carpenter told the OSCE’s permanent council in Vienna on Thursday.

German Chancellor Olaf Scholz called for a broader effort to isolate Russia and thwart what he called President Vladimir Putin’s efforts to undermine the global order.

“This is an attempt to bomb us back to a time when war was a common political tool, when our continent and the world lacked a stable order of peace,” he said Thursday in a speech at the World Economic Forum in Davos, Switzerland.

Scholz’s plea comes as the European Union struggles to maintain a united front in talks over further sanctions against Moscow, and many emerging powers in Asia, Africa and South America show little readiness to punish or even criticize Russia over its invasion of Ukraine.

The Bank of Russia lowered its benchmark to 11% from 14% on Thursday at an extraordinary meeting announced only a day earlier.

Encouraged by a faster-than-expected slowdown in inflation aftershocks to demand, the decision also shows the central bank’s determination to get in the way of the ruble’s blistering ascent. It added to two rate cuts of three percentage points each in April, reversing most of an emergency monetary tightening after the invasion of Ukraine three months ago.

After nine points of easing since April, the central bank said it still “holds open the prospect” of more cuts at meetings ahead.