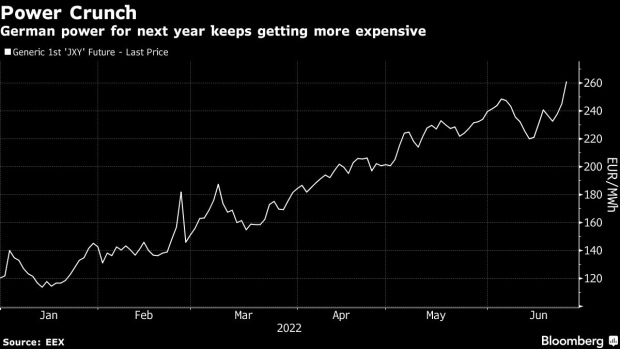 Four Russian missiles struck residential buildings in the center of Ukraine’s capital early Sunday in what Kyiv Mayor Vitali Klitscho said was an attempt to “intimidate Ukrainians.” The strikes followed widespread bombardments in the north and west on Saturday, including missile launches from Belarusian airspace.

The key eastern city of Sievierodonetsk -- largely in ruins after weeks of Russian attacks -- is now fully under Russian control, its mayor said.

Group of Seven talks on a possible price cap on Russian oil advanced enough for leaders to discuss the topic at their summit starting Sunday in Germany, according to people familiar with the matter. The UK, US, Japan and Canada plan to announce a ban on new gold imports from Russia.

A missile hit a nine-story apartment building in Kyiv early Sunday, said Anton Herashchenko, an adviser to the Ukrainian interior minister. Rescue teams are working to find people in the wreckage, according to Kyiv’s mayor, who visited the site, with at least two people hospitalized. Preliminary data shows 14 missiles were launched against the capital and the Kyiv region, a Ukrainian MP wrote on Telegram, according to the Associated Press. Sievierodonetsk in Ukraine’s east “is now under the full occupation of Russia,” the city’s mayor said. Russia said separatist fighters took full control of the Sievierodonetsk chemical plant, the last Ukrainian holdout in the city, AP reported.

Group of Seven talks on a possible price cap on Russian oil advanced enough for leaders to discuss the topic at their summit starting Sunday in Germany, according to people familiar with the matter.

While there’s no agreed proposal, aides reached an understanding that the seven heads of state and government should have a formal discussion. The plan would be for each participating country to set a price cap with the goal of limiting the Kremlin’s revenue and helping rein in energy prices.

Moscow’s troops are now in full control of the key eastern city of Sievierodonetsk, where Ukrainian troops made a days-long controlled withdrawal this week, local officials and the Russian defense ministry said.

Russia has moved in to occupy the city and three nearby villages, said Luhansk regional governor Serhiy Haiday. The city, which was an administrative center, is 90% ruined, he said.

Sievierodonetsk had a pre-war population of about 100,000. It’s been under bombardment for weeks and was the scene of heavy street fighting as well. Street battles have been reported in neighboring Lysychansk.

US President Joe Biden and fellow G-7 Seven leaders will agree to announce a ban on new gold imports from Russia, the latest sanctions in response to the Russian invasion of Ukraine.

The move would mark a total severance between Russia and the world’s top two trading centers, London and New York.

Putin said Moscow would transfer Iskander-M missile systems to the Minsk government within months, according to Interfax. The systems can use both ballistic and cruise missiles in nuclear and conventional versions. Putin also said the Belarusian army’s Su-25 jets could be retrofitted, if necessary, in Russia and Belarusian pilots trained there was well.

Lukashenko said he’s concerned about training flights by the US and NATO and asked Putin to help refit of Belarusian planes to be able to carry nuclear warheads, Interfax reported.

“Precision strikes” on a zinc factory in Kostyantynivka in Ukraine’s Donetsk region killed as many as 80 “Polish mercenaries” and destroyed combat vehicles and rocket launchers, Russian Defense Ministry spokesman Igor Konashenkov said in a briefing.

The NATO chief said he agreed with Turkey’s leader to continue talks in the coming week about Ankara’s concerns about the two Nordic nations joining the military alliance.

Read more: Erdogan Is Hung Up on the Power One Kurdish Woman Has in Sweden

Berlin is pushing for G-7 nations to walk back a commitment that would halt the financing of overseas fossil fuel projects by the end of the year.

A draft text shared with Bloomberg would see the G-7 “acknowledge that publicly supported investment in the gas sector is necessary as a temporary response to the current energy crisis.”