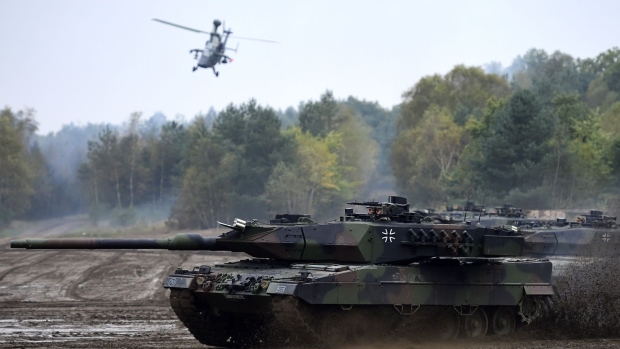 (Bloomberg) -- The US joined Germany in promising to supply Ukraine with battle tanks, providing Kyiv’s forces with a significant upgrade against their Russian invaders.

President Joe Biden said the US will send 31 of its M1 Abrams tanks to Ukraine, without giving details of the timing. Germany has promised more than 100 Leopard 2 tanks, with the first consignment possibly arriving within three months. Ukraine said it hopes that deliveries of planes and long-range missiles will follow.

The Kremlin warned that tanks supplied by allies to Ukraine would be destroyed on the battlefield.

The Russian army launched 21 air and five missile strikes across the front line, as well as 27 attacks from multiple-launch rocket salvo systems, according to a statement by the Ukrainian General Staff. Dozens of civilian settlements in the Zaporizhzhia and Kherson regions were shelled. Clashes in Donbas intensified, but the “superiority of Russians in the number of fighters and weapons faces Ukrainian superiority is in the professionalism of the military command and the courage of the soldiers,” Ukrainian Deputy Defense Minister Hanna Malyar said on Telegram.

Mori, a veteran ruling party member known for his strong ties to Russia, expressed doubt about the degree to which Japan is throwing its weight behind Ukraine, adding Russia could not lose the war, the agency said. He was speaking at a reception in Tokyo on Wednesday evening, also attended by Kishida.

Japan’s government has sanctioned Russia and provided various forms of aid for Ukraine, which have been backed by the public. Kishida told parliament Wednesday that he would consider an invitation to visit Kyiv extended by President Volodymyr Zelenskiy.

In his nightly video address to the nation, Zelenskiy thanked Germany and US for their promises to deliver tanks to Ukraine, and expressed the hope that supplies of other kinds of advanced weaponry will follow.

“We have to unlock the supply of long-range missiles to Ukraine,” he said. “It is important for us to expand our cooperation in artillery, we have to achieve the supply of aircraft to Ukraine.”

Biden said the delivery of US tanks will help Ukraine achieve its strategic objectives. The president, who earlier spoke with European leaders, said Ukraine’s allies are maintaining their common front.

“The expectation on the part of Russia is we’re going to break up, we’re not going to stay united,” Biden said. “But we are fully, thoroughly, totally united.”

The US Treasury warned financial institutions to be on the lookout for Russians seeking to evade sanctions by investing in US commercial real estate.

The Treasury said sanctioned Russians could take advantage of the industry’s complex financing methods and opaque ownership structures to continue investing in the US. It warned banks to keep an eye out for the use of offshore vehicles to purchase commercial real estate.

A week ago, the UK’s Ministry of Defence intelligence update already suggested the Ukrainians had completed the pullback from Soledar as of Jan. 16, but this was the first confirmation coming from Kyiv.

The aim is for Germany and its partners to supply two battalions totaling 112 Leopards and the government in Berlin will give allies authorization to supply their tanks, according to a statement. The package includes training in Germany for Ukrainian troops, logistics, ammunition and maintenance.

“This decision follows our well-known line of supporting Ukraine to the best of our ability,” Chancellor Olaf Scholz said. “We are acting in a way that is closely agreed and coordinated internationally.”

Zelenskiy signed a decree on personal five-year sanctions against businessman Vadim Novinskiy and senior clergymen with the Russian-subordinated part of the Orthodox Church in Ukraine.