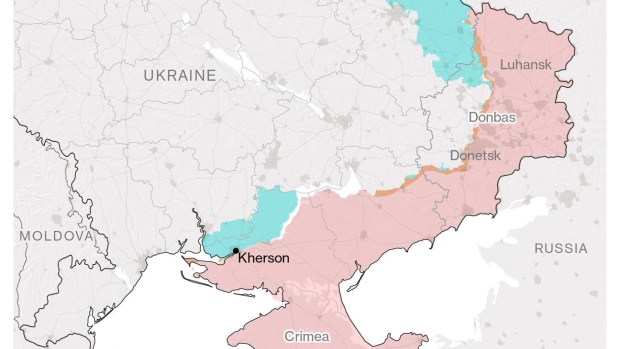 (Bloomberg) -- Iran is now likely the top military backer of Russia the UK said, as it looks to expand its missile strikes against Ukraine’s national infrastructure.

Separately, the chief of NATO warned against the possibility of dragging other European nations into a “full-fledged” war.

In the last 24 hours Russia has carried out five missile strikes, about 20 air strikes and more than 60 rocket launcher attacks, the General Staff of the Armed Forces of Ukraine said.

The head of NATO said in an interview that there’s “no doubt that a full-fledged war is a possibility,” according to the Associated Press.

Secretary-General Jens Stoltenberg said to Norwegian broadcaster NRK that the conflict in Ukraine could “go horribly wrong” and spoke of the need to avoid dragging other European countries into a war.

“We are working on that every day to avoid that,” he said.

Iran has become one of Russia’s top military backers since Russia invaded Ukraine in late February, according to an intelligence update from the UK defense ministry.

Russia is attempting to obtain more weapons, including hundreds of ballistic missiles, while in return Moscow is highly likely offering Iran an unprecedented level of military and technical support, the government said Saturday, echoing the US concerns.

Russia also has probably expended a large proportion of its stock of its own SS-26 Iskander short-range ballistic missiles, the UK said. Russia switched tactics to use massive missile attacks targeting Ukraine’s energy infrastructure since September.

Ukrainian air defense said on Facebook it shot down 10 out of 15 Iranian-made loitering drones over southern regions of Kherson, Mykoaiv and Odesa.

Serhiy Bratchuk, a spokesman for the Odesa region military administration, said on tv. No casualties had yet been reported though residential houses were also damaged with the drones.

“The situation is quite difficult as power was cut in Odesa and almost the whole region,” Bratchuk said. Only hospitals, maternity wards and critical facilities have electricity.

“The frontline situation remains very difficult in the key areas of Donbas,” he said in his nightly video address. “For a long time already there is no living place left on the land of these areas that hasn’t been damaged by shells and fire.”

Bakhmut, located in the Donetsk region about halfway between the cities of Donetsk and Luhansk, has been a focus of Russia’s military effort since early August, the UK Defense Ministry said last week. While capturing Bakhmut would allow Russian forces to threaten larger urban areas of Kramatorsk and Slovyansk, it may have become “a symbolic, political objective for Russia,” according to the ministry.

Russia will impose a 35% import duty on cosmetic products from “hostile” countries, Tass reports, citing Industry Ministry. Products from the US, UK, Canada, Australia and Poland, would be affected.

The government wants to tax shampoo, hair products, toothpastes, shaving creams, deodorants and detergents, which have Russian-made alternatives, it said.