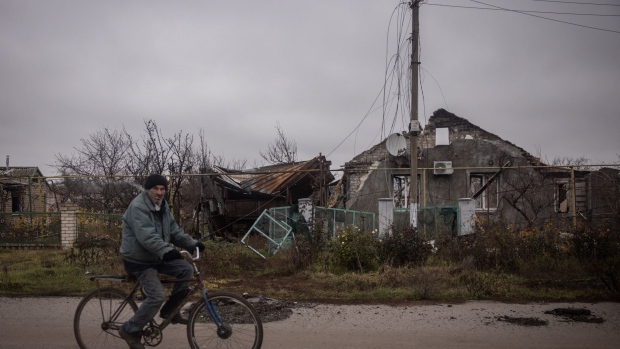 (Bloomberg) -- French President Emmanuel Macron said at a White House news conference that the timing and terms of negotiations over an end to the war in Ukraine must be up to Ukrainians. President Joe Biden said he’d be interested in talking to Russian President Vladimir Putin only if he’s really looking for a way to end the conflict.

Ukraine’s Central Bank may cut its economic outlook following Russia’s recent attacks on the country’s energy system, its governor said. European Union states are starting to coalesce around a plan to cap the price of Russian crude oil at $60 a barrel ahead of a Monday deadline.

Elon Musk risks giving a helping hand to Putin if Twitter Inc. is unable to root out propaganda about the war in Ukraine, one of the European Union’s officials warned. Ukraine’s president has urged Musk to visit his war-torn nation to see first hand the damage done by Russia’s invasion.

Ukrainian authorities will take measures to ban religious organizations and their leaders who are affiliated with Russia and help promote the Kremlin’s narratives, according to President Volodymyr Zelenskiy.

The decision was made in a meeting of the National Security and Defense Council on Thursday, he said in his nightly address on Thursday. Among other measures, authorities will check legal grounds for the Ukrainian branch of Russia’s Orthodox Church to control and use property of the Kyiv Pechersk Lavra, historic monastery located in the center of the nation’s capital.

“We have no other choice than to create such conditions when any actors dependent on the aggressor state won’t have any opportunity to manipulate Ukrainians and weaken Ukraine from inside,” Zelenskiy said. Ukraine’s Orthodox Church that had been struggling to separate itself from Russia’s Orthodox Church for decades finally received self-governing p status in 2019. Despite Russia’s invasion many churches and monasteries controlled by Russia’s Orthodox Church continue to operate in Ukraine.

Macron said that only Ukraine can decide when the conditions have been met to start negotiating a peace settlement with Russia.

“We will never urge Ukrainians to make a compromise that is not acceptable to them,” Macron told reporters after meeting with Biden in the White House. “We have to let Ukrainians decide the moment and the conditions that they will negotiate.” Although the French president has strongly supported Ukraine since Russia’s invasion, he drew strong criticism with his previous calls not to “humiliate” Russia.

Biden said that he’s prepared to speak with Putin “if in fact there is an interest in him deciding he’s looking for a way to end the war -- he hasn’t done that yet.” He neglected to add his administration’s standard formulation that there would be no moves concerning Ukraine unless Ukraine participated.

Ukraine’s President Volodymyr Zelenskiy spoke with Macky Sall, president of Senegal and chairman of the African Union, about the implementation of the “Grain from Ukraine” initiative launched last week and other matters.

German’s chancellor said he would welcome an increased role by NATO to coordinate the security of allies’ critical infrastructure, and particularly subsea links.

Separately, asked whether Germany was doing enough to reduce dependencies on Beijing in light of a recent contentious deal with the Hamburg port, Stoltenberg said each country “has to find the balance between economic engagement with China and at same time preventing becoming too dependent or vulnerable.”

Deputy Treasury Secretary Wally Adeyemo said that he’s confident European Union countries will soon agree on a price cap for Russian crude oil, and that $60 a barrel would be “in the range” coalition countries have discussed.

Foreign ministers and other senior officials from Europe and beyond made “one more step” at their meeting in Poland toward creating a special tribunal to evaluate Russia’s “crime of aggression,” Ukraine Foreign Minister Dmytro Kuleba said on Twitter.

Discussions were held in a side-event to the Organization for Security and Co-operation in Europe (OSCE) annual meeting being held in Lodz. The gathering continues on Friday.

Poland, which chairs the OSCE in 2022, said that “all tools available” should be harnessed to bring attention to the impact of Russia’s war in Ukraine on children.

Ambassadors from the Group of Seven expect the Ukrainian Congress of Judges to appoint eight new members of the High Council of Justice in January, the group said on Twitter. “This will restart the Council’s work, reinforce Ukraine’s resilience and fulfill a key condition for Ukraine’s EU path,” according to the statement.

Another 50 Ukrainian prisoners of war have been returned in a swap with Russia, Andriy Yermak, a top presidential aide, said on Telegram. Those returning home include soldiers from Mariupol and Azovstal, as well as wounded from the Olenivka prison facility, he said.

Russia’s defense ministry earlier announced a swap of 50 prisoners on each side, without providing more details.

Spanish officials say a suspicious package was found at the US embassy in Madrid, a day after an explosive device ignited at the city’s Ukrainian embassy, the Associated Press reported.

Earlier, Secretary of State Rafael Perez said devices were detected on Thursday at Spain’s defense ministry, and a package containing a “pyrotechnical” substance was found on Nov. 24, addressed to Spain’s prime minister.

Macron Holds Out Hope for Negotiations, Will Speak With Putin (2:31 p.m.)

French President Emmanuel Macron says he plans to speak with Vladimir Putin in the “coming days” about Russia’s war in Ukraine, and believes it’s still possible to negotiate a solution to the conflict.

“I wanted to first have the state visit with President Biden and have an in-depth discussion with our two teams together,” Macron said of his upcoming conversation with Putin during an interview Thursday with ABC News.

Macron said he believed Putin could still be a rational actor. “My conviction and my pragmatic approach is I have to engage with the existing leaders and the one in charge of the country.”

The bank is likely to make the move following Russia’s weeks of attacks on the country’s energy system, though won’t change forecast for inflation, Governor Andriy Pyshnyi told local Forbes in an interview.

The policymaker saw Ukraine’s economy growing by 4% in 2023 after contraction of more than 31% this year, but will have to review this outlook after the Russia’s bombardment of the country’s regions and cities, most recently on Nov. 23, which led to the changes that the central bank’s governor called “dramatic.” Large swaths of Ukraine have been without power and water.

“The impact may turn out to be much more powerful than we predicted before,” Pyshnyi said. “At the same time, damages to energy infrastructure have already exceeded our estimates as of October, so it is highly likely that we will downgrade our outlook for economic activity.”

European Union states are starting to coalesce around a plan to cap the price of Russian crude oil at $60 a barrel, their latest attempt to clinch an agreement before a Monday deadline, according to people familiar with the matter.

Amazon Web Services and Ukraine’s ministry for digital transformation signed a memorandum on cooperation for 2023 and an allocation of $75 million for cloud technologies.

“The cloud can’t be destroyed by missiles, so Amazon makes us more resilient.”, Ukrainian Deputy Prime Minister Mykhailo Fedorov said in a statement on the ministry’s website.

A group of seven European Union member states is pushing for a more dynamic gas price cap, arguing that the one put forward by the bloc’s executive branch is designed so that it won’t get triggered and therefore wouldn’t help consumers pay their bills.

Countries including Italy, Belgium and Greece, are submitting an amendment that would set a cap based largely on a fixed level -- using as an example €160 ($167) per megawatt-hour -- but also with a floating element based off prices at key international hubs, according a document seen by Bloomberg.