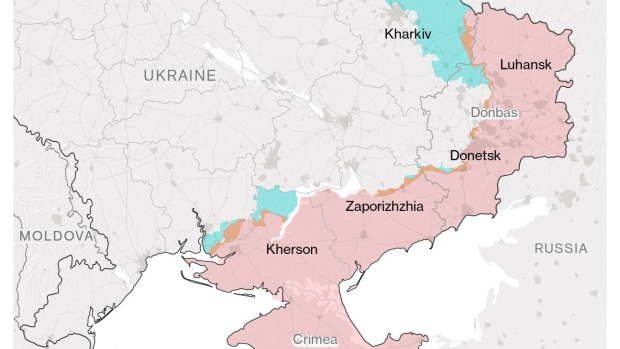 (Bloomberg) -- The European Union approved a fresh package of sanctions against Russia that includes a price cap on oil sales, as Ukrainian President Volodymyr Zelenskiy said his forces were advancing in the south.

Russia’s top energy official, Deputy Prime Minister Alexander Novak, said a price cap on its exports would backfire and might lead to a temporary cut in production. Speaking in an interview after an OPEC+ meeting in Vienna, Novak reinforced the Kremlin’s warning that his country won’t sell oil to any countries that adopt the cap.

Elsewhere, the Kremlin vowed to recapture territory that’s been seized back by Ukrainian forces, saying that occupied regions to which Moscow has laid claim will be “with Russia forever.” That comes as Ukrainian forces press through sparsely manned defense lines in the southern region of Kherson, making “substantial” progress, according to the US-based Institute for the Study of War.

Ukrainian forces continued to make “substantial” gains in the north of the Kherson region, beginning to collapse sparsely manned Russian lines in that area, the ISW said. Ukrainian forces advanced in the eastern Kharkiv region west of Svatove. Their forces have liberated several small towns in Luhansk -- a region still mostly controlled by Russia -- according the governor, Serhiy Haiday.

Russia launched an overnight drone attack on the city of Bila Tserkva, 75 kilometers (47 miles) southwest of the nation’s capital, Ukrainian Air Force spokesman Yuriy Ignat said on television. The Ukrainian military expects similar strikes in other areas as Russia may have taken delivery of hundreds of drones from Iran, he said.

The Ukrainian foreign ministry has urged the European Union, G7 countries and other partners to consider immediate sanctions against Russian nuclear company Rosatom, affiliated companies and institutions, and against key Russian officials in the nuclear sector, according to a statement from the ministry.

Ukraine sees Russian President Vladimir Putin’s decree to formalize the control of Zaporizhzhia nuclear power plant as “a crime which further increases risks and threats in the nuclear security caused by Russian occupation of the power plant.”

Presidential adviser Mykhaylo Podolyak called the decree an attempted raider’s attack, according to a statement on Twitter. Podolyak urged sanctions and an end to any cooperation with Russia in the nuclear sector.

US officials believe parts of the Ukrainian government authorized the August attack in Moscow that killed the daughter of a prominent Russian nationalist and fear such moves could expand the war, the New York Times reported Wednesday.

The US did not take part in, or have advance warning of, the car bombing and have since rebuked Ukraine over it, officials told the paper. Ukraine denied responsibility at the time.

There has not been specific retaliation for the assassination of Darya Dugina, whose far-right political theorist father, Alexander Dugin, is believed to have been the actual target. But the US is concerned such moves could provoke Russia to target Ukrainian officials.

President Vladimir Putin ordered his government to formally take ownership of the Zaporizhzhia Nuclear Power Plant from Ukraine after Russia laid claim to the territory where the facility is located.

Russian troops have controlled the area where the plant is located since March and Putin signed laws formally annexing the territory on Wednesday. The United Nations, as well as many countries, have denounced the annexation as illegal.

The head of the UN’s nuclear watchdog, the International Atomic Energy Agency, said he was traveling to Kyiv for talks on nuclear safety as the organization calls for a security zone around the Zaporizhzhia plant. The measure is “now more urgent than ever,” IAEA Director General Rafael Mariano Grossi said in a Tweet.

The Organization for Economic Cooperation and Development’s council recognized Ukraine as a prospective member of the intergovernmental body whose aim is to promote global trade. The organization will open talks with Kyiv, it said in a statement.

The gas leaks in the undersea Nord Stream pipelines in the Swedish economic zone appear to be decreasing in strength, according to a statement from the country’s coast guard.

The Nordic nation has begun an investigation on site, with newspaper Dagens Nyheter reporting Wednesday that the navy has a submarine-rescue ship and a mine countermeasures vessel working near the leaks.

Dozens of ships carrying Ukrainian grain are piling up to clear inspection in Istanbul, underlining the limits of the country’s crop-export revival. More than 70 loaded ships are due for inspection, indicating “some congestion” as well as growing interest in the deal, according to a United Nations spokesperson for the Black Sea Grain Initiative.

Ukraine has been shipping crops at a rapid clip since a deal was agreed in late July to resume its seaborne trade, which had been stalled by Russia’s invasion. About 6 million tons have departed its Black Sea ports, with cargoes bound for Europe, Asia and Africa.

Chris Badia, NATO’s deputy supreme allied commander for transformation, said the alliance takes Putin’s comments “absolutely seriously,” especially given Russia’s performance in the war in Ukraine and how the president might react to that.

While speaking on a panel at the Warsaw Security Forum, Badia said NATO is a defensive alliance and prepared with all means. “All options are on the table from a military point of view,” he said, adding if anything should happen, it would be a political decision. He signaled that a response would likely be “conventional,” initially.

“If you look at escalation metrics and think it through, I would say most probably this would be one of the first options on the table,” Badia said, “but nothing can be ruled out.”

Russia plans to retake the parts of Ukraine it lost to Kyiv’s advances in recent days after formally declaring that the annexation of those territories, according to Kremlin spokesman Dmitry Peskov.

“There’s no contradiction. They will be with Russia forever, they will be returned,” he said in response to a question about how the retreat of Moscow’s forces from the areas in recent days fit with the Kremlin’s repeated claims that they will be Russian territory permanently.

Peskov also kept up the uncertainty about the precise borders of the lands Russia is claiming, refusing to specify where they lie in the contested areas. He suggested that the Kremlin is laying claim to territory controlled by its occupation administrations, but also said that it’s planning to retake more and will “consult” with residents who want to join Russia.

The EU backed a new package of Russia sanctions that includes support for a price cap on oil sales to third countries and mechanisms to avoid circumvention of sanctions, Andrzej Sados, the Polish ambassador to the EU, told reporters.

The measures would add a ban on shipping Russian oil to existing restrictions on services needed to transport it, but carve out an exemption for crude priced at or under a level set by a coalition of the Group of Seven and other countries, according to a draft of the proposal seen by Bloomberg.