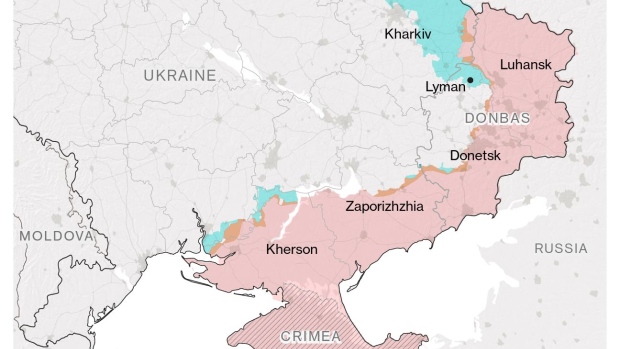 (Bloomberg) -- Ukrainian President Volodymyr Zelenskiy said that liberating settlements from Russian occupation is now “the trend” as his forces press further into the eastern Donetsk region and seek gains in the south.

As Russia’s forces lose ground to Kyiv’s counteroffensive, the Kremlin said it still hasn’t finalized the borders of two of the four regions of Ukraine that President Vladimir Putin laid claim to last week.

His comment comes after the strategic eastern town of Lyman was “fully cleared,” the president said in a brief video. The town is part of the regions Putin annexed following referendums termed illegal by Ukraine and its allies.

Ukrainian forces resumed a counteroffensive in the southern Kherson region and have secured positions in Zolota Balka and Khreshchenivka, the US-based Institute for the Study of War said. Ukrainian forces continued to win back settlements east and northeast of Lyman and have taken Torske in the Donetsk region. Infrastructure in the city of Zaporizhzhia was damaged by missile strikes Monday morning. Over the past day, Russia launched 11 missile and 10 air strikes and over 65 rocket attacks, attacking some 35 Ukrainian settlements, Ukraine’s General Staff said.

Musk Says SpaceX Has Spent About Million on Ukraine (6:25 a.m.)

SpaceX’s out-of-pocket costs for providing Ukraine with Starlink dishes stands at around $80 million so far, Elon Musk said in a tweet late Monday, adding that the company is “obviously” pro-Ukraine as it defends itself against the Russian invasion.

Musk, the company’s chief executive, infuriated Ukrainians when he suggested that the country seek a negotiated solution to the invasion by Russia and cede Crimea for good.

The US sees nothing in Russia’s movements so far to compel a change in the American nuclear posture, a senior military official, briefing on condition of anonymity, told reporters at the Pentagon.

Also, the official said that although the US is seeing some Russian replacement forces entering Ukraine it’s not on a large scale despite Putin’s move to mobilize 300,000 troops.

Tesla Chief Executive officer Elon Musk drew the wrath of Ukrainians from the president down for Twitter posts urging Ukraine to seek a negotiated solution to the invasion by Russia and to cede Crimea for good.

Musk also launched a Twitter poll asking citizens of occupied areas of eastern Ukraine recently annexed by Russia -- plus Crimea, which Moscow took in 2014 -- to decide if they want to live in Russia or Ukraine.

The reaction from Ukraine was immediate. President Zelenskiy responded by posting his own poll to Twitter asking his followers if they preferred an Elon Musk who supports Ukraine -- or Russia.

“The Russians have escalated dramatically in the last week,” Eurasia Group President Ian Bremmer said in an interview on Bloomberg Television’s “Balance of Power With David Westin.”

Putin’s annexation claims make it “almost impossible to think about sitting down with the Ukrainians in the near to medium term but it also puts Putin in a corner because he’s going to lose a lot of this land.”

“The Russian didn’t even control all of it when he annexed it,” Bremmer said. “I think that’s the first time in history you can say that.”

Next Package of US Weapons for Ukraine Coming Within Days (8:40 p.m.)

The US will announce another package of security assistance for Ukraine “in the next few days,”John Kirby, spokesman for the US National Security Council, said Monday in an interview on Bloomberg Television’s “Balance of Power With David Westin.”

“You’re going to see us continue to provide them the kinds of weapons and capabilities that are well-suited to the fight that they’re in,” Kirby said. A $625 million package is expected to include four more High Mobility Artillery Rocket System (HIMARS), Reuters reported, citing sources it didn’t name. The launchers are prized by the Ukrainian military.

Kirby also said in the interview that the US so far has “seen no indication” that countries are moving to recognize Russia’s annexation claims after conducting bogus referendums.

Murashov was kidnapped by Russian forces Sept. 30 as he was heading from the plant seized by Russia to the nearby city of Energodar, according to Energoatom. Rafael Mariano Grossi, head of the International Atomic Energy Agency, played a significant role in his release, the company said.

Following something of a pause in offensive operations in the south, Ukrainian troops have begun a renewed counteroffensive in the Kherson region. According to Russian military bloggers, by Monday morning they had made significant inroads along the northern reaches of the massive Dnipro river’s western bank.

Russia’s Defense Ministry conceded that its forces pulled back after “superior tank units were able to pierce deep into our defenses” near Zolota Balka and Oleksandrivka.

Although Putin last week annexed four Ukrainian provinces, including Kherson and Donetsk, Moscow’s forces don’t fully control of any of the areas and are being pushed out of some towns they’ve held for months, raising concerns over Putin’s threats of escalation, including the potential use of nuclear weapons.

The Russian Interior Ministry put on its wanted list a journalist who gained international attention for staging an anti-war protest on the main TV news channel.

Marina Ovsyannikova accompanied by her daughter fled house arrest in Moscow, her ex-husband said over the weekend. Her lawyer said he couldn’t confirm whether this is true or not.

Ovsyannikova faced prosecution under a law on spreading information discrediting the Russian army, an offense punishable by up to 10 years in prison.

The future “will be written around a negotiation table, and not on the battlefield,” she told the National Assembly before a debate about Ukraine. These talks “must allow Ukraine to be fully heard,” she added.

“The war in Ukraine will last but we are ready,” she said, adding that France had already sent €200 million worth of equipment to Ukraine totaling 2,500 tons.

Moscow is throttling gas shipments to the region following its invasion of Ukraine but Europe continues to import Russian LNG.

Kyiv city authorities cite a rising Covid case rate in calling for a return to wearing masks in public places. “We recommend wearing masks in transport, public service places and educational institutions”, according to a statement on Kyiv’s Telegram account. “The incident rate in Kyiv is increasing rapidly -- up to 2515 cases of COVID-19 within a week, 22 people died.”

The European Union is aiming for a preliminary deal as soon as Monday on a new sanctions package meant to punish Russia for escalating its war in Ukraine and illegally annexing four occupied territories there.

“I am hopeful in a couple of hours we can have a unanimous agreement on the sanctions package,” Polish ambassador to the EU, Andrzej Sados, told reporters. “We are very close to it and there is determination to clinch a deal ASAP.”

Member states are eager to reach an agreement before EU leaders meet in Prague on Oct. 7, said people familiar with the matter, who asked not to be identified because the discussions are private.