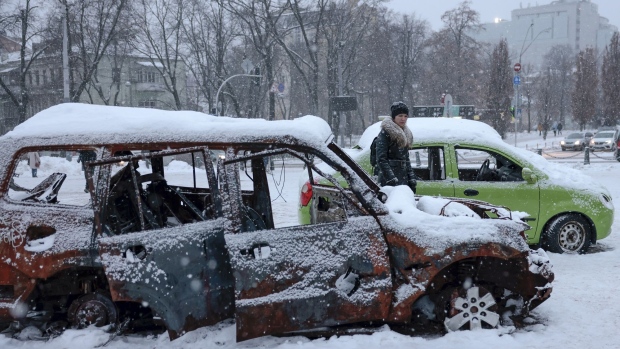 (Bloomberg) -- The US is prepared to assist Ukrainians as they are about to enter “a brutal winter,” White House Chief of Staff Ron Klain said Monday night.

Moscow confirmed attacks against two airfields well inside its borders, accusing Ukraine of what could be the deepest strikes into Russian territory since the start of the war.

Ukraine didn’t claim responsibility for the attacks, which Russia said killed three people. Kyiv said its forces had shot down most of a barrage of 70 missiles targeting its energy infrastructure. Russia said it had hit 17 sites.

Russian missiles hit Ukrainian energy infrastructure, according to the nation’s energy grid. “Powerful explosions” also hit the city of Kryvyi Rih in central Ukraine overnight, Mayor Oleksandr Vilkul said on Telegram. Ukrainian troops repelled attacks near 13 settlements in the Luhansk and Donetsk regions over the past day, Ukraine’s General Staff said on Facebook. According to its statement, Russia shelled more than 20 settlements along the right bank of the Dnipro River on the Kherson axis.

US Secretary of State Antony Blinken said on Monday the US remains concerned that Russia might use diplomatic negotiations to end the Ukraine war as a ruse to improve its tactical position on the battlefield.

The war in Ukraine is likely to eventually end in diplomacy, Blinken said Monday evening at the Wall Street Journal’s CEO Council summit, but added that Russia doesn’t currently seem interested in “meaningful” negotiations that could result in a “durable” peace.

“One of the things that you can imagine is the Russians trying to find an off-ramp that would be a phony off-ramp,” Blinken said. “By which I mean, ‘Oh, let’s have a ceasefire. Let’s just freeze things in place.’ Get a frozen conflict. Never negotiate about the territory that they have seized and continue to hold. Rest, refit, regroup, re-attack.”

Klain said “we want to make sure we do everything we can to help the Ukrainians get through that winter” and that additional aid would be required “very quickly.”

In remarks at the Wall Street Journal CEO Council summit on Monday night, Klain said that the US would “continue to support the Ukrainians with more weapons and more economic assistance. They’re facing a brutal winter, brutal winter in terms of a lack of power, and real decimation of their economy, a brutal winter on the battlefield as well.”

The Biden administration will hold a meeting with senior executives from oil and gas companies to discuss ways to support Ukraine’s energy network as Russian missile strikes lead to blackouts and other disruptions.

The talks are scheduled for Thursday morning between the Department of Energy and business leaders. “Together, we can help to boost Ukrainian resilience and reinforce that country’s energy infrastructure,” Deputy Secretary of Energy David Turk said in a letter inviting industry executives to the meeting.

President Vladimir Putin extended through 2023 a ban on investors from “hostile” countries selling stakes in strategic assets in Russia, including in the banking and oil industries, Tass reported, citing an official document published on Monday. The curbs, announced in August, had been due to expire at the end of this month.

Emergency power cutoffs will be introduced for all Ukrainian regions to help balance supplies after the latest Russian missile attacks on energy infrastructure, according to grid operator NPC Ukrenergo.

The integrity of Ukraine’s power system hasn’t been affected by the attacks, the eighth round of strikes since early October, and it continues to work “synchronously” with the EU network, Ukrenergo said. Engineers have begun to fix damage in several regions, including southern Odesa which is among the hardest-hit areas. the operator said. Part of Ukraine’s power production system won’t be able to work at full capacity for some time, it said.

Ukraine didn’t respond to the accusation, although presidential adviser Mykhailo Podolyak said “if something is launched into other countries’ airspace, sooner or later unknown flying objects will return.”

Both bases are used by Russian long-range aircraft to bomb Ukraine. The ministry said three people were killed and two planes suffered damage. Earlier, Kremlin spokesman Dmitry Peskov said reports on the incidents had been sent to Putin.

Prime Minister Denys Shmyhal added that the electricity grid continued functioning even as Russian missiles hit infrastructure sites in the Kyiv, Vinnytsia and Odesa regions. Emergency power cuts had to be implemented in some regions in order to keep the system balanced, he said on Telegram.

Ukrainian Railways approached its debt holders with a request to defer payments on $895 million of its dollar bonds due 2024 and 2026. The state-owned company is seeking to hold coupon payments and extend the maturity on the 2024 notes by two years, citing “unprecedented economic and operating uncertainty” after Russia’s invasion of Ukraine.

The request mirrors Ukraine’s successful effort to win bondholders’ consent for a similar request, as well as attempts from fellow Ukrainian companies, including poultry producer MHP and state oil and gas company Naftogaz.

Putin drove a Mercedes across the Kremlin’s flagship bridge to the occupied Crimea peninsula, which is still being repaired after a suspected truck bomb seriously damaged the span in October.

“We’re driving across the right side,” the Russian president said in footage broadcast on state TV. “The left side, as far as I understand, is in working condition but it needs to be fully restored. It was slightly damaged, it needs to be returned to ideal condition,” he told Deputy Prime Minister Marat Khusnullin, who was in the passenger seat.

Russia blamed Ukraine for the Oct. 8 explosion that hit a fuel train and caused the partial collapse of the road link running from the Russian mainland to Crimea, which Moscow annexed in 2014. Ukrainian officials didn’t claim responsibility but the country’s postal service quickly announced a new stamp commemorating the blast.

Blackouts in Some Ukrainian Regions After Salvo (3:36 p.m.)

Power supply and other critical services that operate on electricity have been cut off in some Ukrainian regions, including preventively, the nation’s grid operator and local officials said.

Moldova discovered a fallen missile in a village close to the Ukrainian border after Russia launched a new barrage of missiles against Ukrainian infrastructure, the government said in a statement on Telegram.

The area in the town of Briceni was secured by police, and the government has raised the level of alert, it said. Moldovan energy company Moldoelectrica also warned of new interruption of power supply due to the attacks against its neighbor.

“This once again proves that Russian missile terror poses a huge threat not only to Ukraine, but also to the security of neighboring countries,” Ukrainian Foreign Ministry spokesman Oleh Nikolenko said on Facebook. “Ukraine should get modern anti-missile and anti-aircraft defense systems as soon as possible, which save people’s lives, protect critical infrastructure and prevent further missile attacks from the Russian Federation.”

Tymoshenko called for aid points to gear up for an influx of people seeking shelter by gathering water and turning on the heat, as social media feeds showed videos of Ukrainians crowding into metro stations.

“Russia continues to do what it began doing Oct. 10, above all targeting objects of critical infrastructure,” air defense spokesman Yuriy Ihnat said on television.