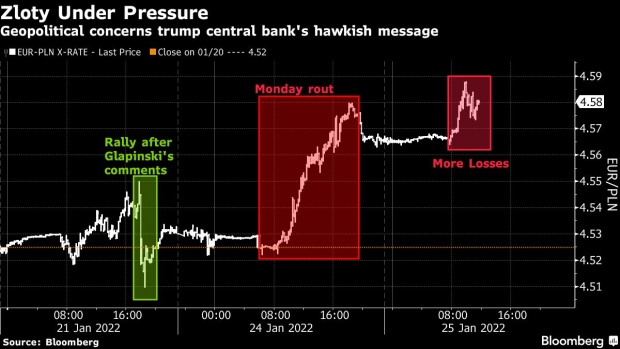 A Ukrainian soldier with the 56th Brigade, in a trench on the front line in Pisky, Ukraine, on Jan. 18. , Photographer: Brendan Hoffman/Getty Images

Poland’s zloty is once again caught up in investor concerns about growing tensions between Russia and Ukraine.

The currency has weakened for the second straight day on Tuesday, despite signals of more aggressive interest-rate increases from the central bank’s governor. The zloty has lost 1% against the euro, making it the worst performer in the emerging markets this week.

The slide has deepened even as Ukraine’s foreign-currency bonds and Polish stocks halted their drop following the market rout on Monday. The koruna and the forint are also stronger.

Poland’s dependence on energy imports from Russia and the fact that the zloty is more liquid than its peers in the European Union’s east make the currency more vulnerable, Citigroup Inc. economists said. The country’s location isn’t helping either, according to InTouch Capital Markets Ltd.

“As a country neighboring Ukraine and Russia, Poland is potentially more exposed to geopolitical issues,” said Piotr Matys, a senior currency analyst at InTouch. “The zloty may remain vulnerable until there’s concrete evidence that Russia is making steps to de-escalate by withdrawing at least some of its troops from the border with Ukraine.”

Western allies are pushing ahead with diplomatic efforts to avert war between Russia and Ukraine, though the Kremlin warned that a U.S. decision to put as many as 8,500 troops on alert for deployment in Eastern Europe “exacerbates tensions.”

Polish Governor Adam Glapinski’s hawkish pivot on Friday gave only a brief support to the currency. Both the Czech Republic and Hungary have higher interest rates than Poland, which is supporting the koruna and the forint, Matys said.