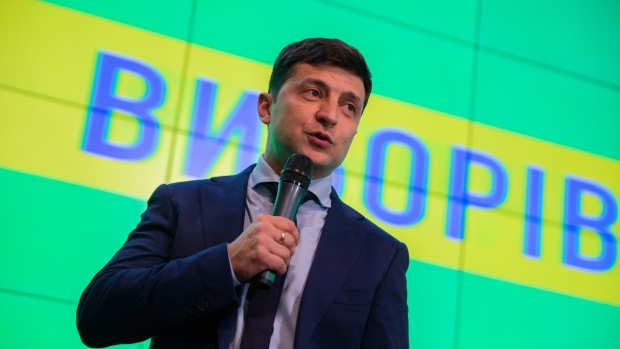 (Bloomberg) -- Rinat Akhmetov doesn’t like to talk about his early business endeavors in the crime-ridden city of Donetsk in the 1990s, where a bomb killed his business partner during a soccer match.

“It’s easier for me to tell you how I earned the first billion,” Akhmetov told reporters at a rare news conference in 2006, when asked how he made his first million.

These days Akhmetov owns the nation’s top soccer team, Shakhtar, along with myriad businesses -- including steel and iron-ore producers, power generation and distribution companies, a bank and insurers, and a television channel -- that collectively have outsize influence in Ukraine. Even though some of his $5.8 billion fortune is concentrated in territory held by Russian-backed separatists, he’s by far the country’s richest person and, even after some lean years, one of the wealthiest in Europe, according to the Bloomberg Billionaires Index.

Even though his net worth has plunged 74% from its 2013 peak of $22.4 billion, Akhmetov is one of the survivors. He forged a conglomerate from the ruins of the post-Soviet era, escaped prosecution and saved his empire from more than a decade of political turmoil, including Russia’s annexation of Crimea.

Now, the 52-year-old tycoon faces a foe as formidable as he is unlikely.

Volodymyr Zelenskiy, a former comedian, surprisingly swept to power in April, promising to purge Ukraine’s oligarchs from positions of influence. While it’s a common refrain in a country where people have long complained of endemic corruption and plutocracy, this time voters believed they wouldn’t be cheated by the candidate with no political experience.

“Ukrainian oligarchs are the personification of crony capitalism,” said Andriy Gerus, Zelenskiy’s representative to the government. “This can’t go on. We will do our best to put an end to exploiting monopolistic power for enrichment.”

Akhmetov expressed optimism when asked whether he expects Zelenskiy’s election to be bad for his businesses.

“I am convinced that President Zelenskiy and I have the same goal: a strong, independent, integrated, democratic and successful Ukraine,” he said in an email. “Our country could create a favorable investment climate so that both national and foreign investors will come to Ukraine instead of leaving it.”

Taking on the oligarchs is easier said than done, but there are signs it may be different this time around. Earlier this month, Ukrainian anti-graft detectives said they suspect officials at Akhmetov-owned DTEK Energy BV, the country’s largest energy company, of manipulating power prices and forcing consumers to overpay by 19 billion hryvnia ($758 million) in 2016 and 2017. DTEK executives pressured regulators to raise tariffs for electricity, according to the National Anti-Corruption Bureau.

The alleged scheme, known as Rotterdam+, has been the target of journalists and activists who blame it for hurting the economy and fueling misconduct.

As the war with pro-Russian rebels in Ukraine’s East caused coal shortages, the nation’s energy regulator introduced a new method for calculating the price of electricity generated from fossil fuels. In 2016 and 2017, during months of peak electricity consumption, tariffs on Ukrainian thermal power producers soared by more than 80% from previous years as the formula tied the levies to the cost of coal in foreign seaports and delivery.

DTEK, which accounts for more than 80% of Ukrainian coal production and owns 75% of the country’s thermal power plants, became the main beneficiary of the pricing model. It continued to receive coal extracted from its mines at much lower cost, while selling electricity at higher prices.

“There is no legitimate basis for the suspicions set out in the investigation,” the company said in a statement last week. In his email, Akhmetov said he’s “convinced that the investigation will sort things out” and that he’s “confident in the victory of the rule of law.”

In the late 1990s, he spent tens of millions of dollars buying coal mines and metallurgical plants in eastern Ukraine amid a wave of privatization. In 2000, Akhmetov established a company now called SCM to manage those businesses.

The wealthiest consolidated power during the presidency of Leonid Kuchma, whose son-in-law, Victor Pinchuk, had become one of Ukraine’s richest people. In 2004, backed by influential political allies, Akhmetov and Pinchuk acquired Ukraine’s largest steel producer, Kryvorizhstal, for the equivalent of $800 million.

Seeking to secure his safety, Akhmetov ran for parliament to obtain a lawmaker immunity and won (he never delivered a speech in the assembly and submitted only one bill). He joined the pro-Russian Party of Regions, led by Yanukovych, which won the elections in 2006 and formed a new cabinet, providing some relief for the billionaire’s business empire.

In 2014, another revolution erupted. Petro Poroshenko, a candy mogul who won the presidential vote after pro-European protesters toppled Yanukovych, pledged to remove oligarchs from power. But Akhmetov retained his standing as Ukraine’s richest person, although the war with pro-Russian separatists that flared up in the country’s East hurt business and further eroded his net worth, which had dropped as low as $2.4 billion by early 2016.

While Akhmetov’s wealth has recovered somewhat, there may be more trouble ahead as Zelenskiy seeks to curb DTEK’s influence. Gerus, the president’s representative and potentially energy minister in a new cabinet, suggested a price cap as a possibility.

“We will seek the best possible solution,” he said.

To contact the reporters on this story: Volodymyr Verbyany in Kiev at vverbyany1@bloomberg.net;Alex Sazonov in Moscow at asazonov@bloomberg.net

To contact the editors responsible for this story: Peter Eichenbaum at peichenbaum@bloomberg.net, ;Pierre Paulden at ppaulden@bloomberg.net, Steven Crabill