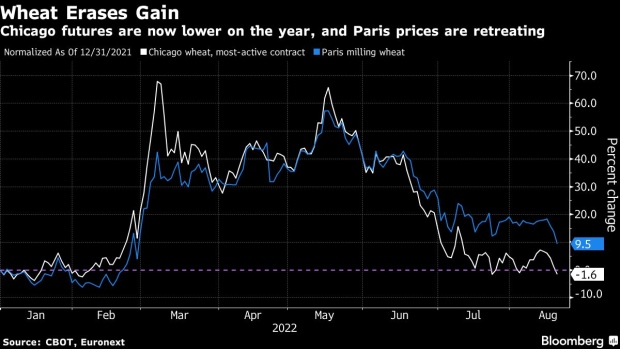 More than 500,000 tons of foodstuffs aboard 21 ships were exported from the country’s major Black Sea ports in the first half of August, under a deal agreed late last month. That’s far below a normal pace, but is providing some relief to grain supplies strained by Russia’s invasion and bad weather curbing harvests elsewhere.

“We have seen signs that global food markets are beginning to stabilize,” UN Secretary-General Antonio Guterres said in a statement Thursday.

A stream of fresh vessels is arriving, signaling cargoes will continue to flow. A key challenge is whether larger vessels normally commonplace in Ukraine’s ports are willing to transit the corridor and boost flows, even as Moscow continues its wider assault.

“Ukraine unlocked grain which was blocked in silos all over the country, and it will push the market down,” Elena Neroba, an analyst at brokerage Maxigrain, said by phone. “The main obstacle is to assure shipowners that this corridor is safe and they can use it without extra payment.”

The Ukraine crop-export corridor covers Odesa and two other key ports, while hubs such as Mykolayiv remain shut. The agreement was brokered by Turkey and the United Nations. Ukrainian President Volodymyr Zelenskiy is due to meet Thursday with his Turkish counterpart and the UN secretary-general in Lviv. The UN official will also visit Odesa.

Ukraine’s grain exports in the 2022 to 2023 season are now seen at 30.4 million tons, compared with a July outlook for 22.6 million tons. Beofre the war, 5 to 6 million tons could depart Ukrainian ports monthly.

Still, prospects for an acceleration in flows are weighing on grain prices and Thursday’s visit from the UN is expected to paint a “first reassuring picture” despite the limited pace, said Paris-based adviser Agritel. Ukraine also continues to ship crops via alternative land and river routes established during the war.

Chicago wheat futures fell as much as 4.8% on Thursday to $7.4325 a bushel, the lowest since January -- before the war began.

The first seaborne cargoes to flow were vessels stuck since the invasion in February, mainly stocked with corn and sunflower products. New vessels are also now departing, including a wheat shipment bound for Ethiopia under the UN’s World Food Programme.

Many cargoes have been relatively small. Traders and shipowners are likely seeking to ensure the corridor is working as planned and assess transit times before agreeing bigger sales, Neroba said. Vessels must be inspected in Turkey before entering and departing Ukraine, under the terms of the deal.