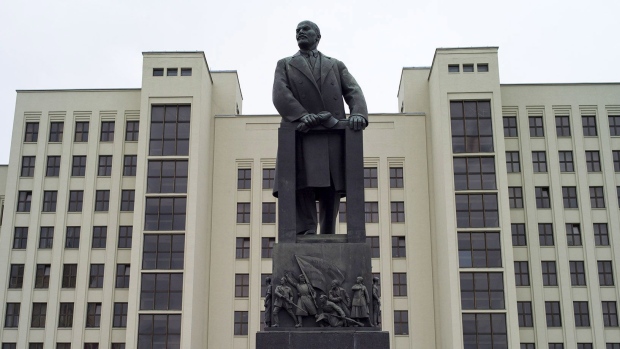 MINSK, BELARUS - JULY 01: A statue of Vladimir Lenin in front of Government House in Independence Square on July 01, 2017 in Minsk, Belarus. Independence Day, also known as the Day of the Republic is celebrated annually on July 3, and marked as an official national public holiday, commemorating the anniversary, when the capital, Minsk, was liberated by Soviet troops from Nazi occupation during World War II. The post-Soviet republic of Belarus, borders Poland to its West, Lithuania to its North West, Russia to its North East, and Ukraine to its South. A predominantly flat country of Lakes and Forests, home to Wolves, Brown Bears and EuropeÕs only population of Bison. The population is around 9.5 million people, and it often cited as being 'Europe's last Dictatorship'. Belarus' current President Alexander Lukashenko has been in power since 1994, winning his fifth term in October 2015 with 83.5 % of the vote. Visa restrictions to Belarus have recently been lifted, allowing citizens from the European Union, America and 51 other countries visa-free entry to the country for up to 5 days through Minsk International Airport. (Photo by Dan Kitwood/Getty Images) Photographer: Dan Kitwood/Getty Images Europe , Photographer: Dan Kitwood/Getty Images Europe

(Bloomberg) -- Hackers linked to the Belarusian security service may be behind last week’s cyberattack against Ukraine, according to a Ukrainian official.

The former Soviet nation endured a mass cyberattack at several of its ministries and public services on Friday.

Preliminary findings show that a group of hackers known as UNC1151 from Russian ally Belarus may have led the operation, Serhiy Demedyuk, deputy head of Ukraine’s National Security and Defense Council, told Bloomberg News in a text message.

UNC1151 is a cyber-spy group related to the Belarus security service, Demedyuk said. The group uses a tactic known as “credential harvesting,” or gaining unsanctioned access to mail accounts, followed by the spread of malware, he said.

According to Demedyuk, the hacking group has been active in Lithuania, Latvia, Poland and Ukraine, and often use a narrative that mocks NATO’s presence in the Northern Europe.

Ukraine on Friday said there were “signs” that Russia may be behind the latest cyberattack. Russia denied those accusations.

Tensions in the region have escalated in recent weeks as Russia continues to keep troops near its border with Ukraine, a move that may be preparation for a full-scale invasion, according to Ukraine’s Western partners.

Russia says it wants NATO to bar Ukraine and other ex-Soviet states from membership, and to roll back its forces to positions they held in 1997.