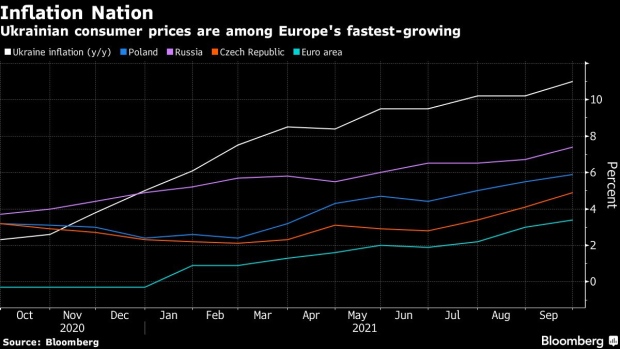 Ukraine is expected to keep a promise to leave borrowing costs untouched, though remarks this week by the International Monetary Fund have some wondering whether a fifth interest-rate increase of 2021 could yet materialize.

The issue at hand is inflation, which at 11% is among Europe’s quickest. While acknowledging the risks posed by surging energy prices, the central bank says consumer-price growth is probably peaking.

But the IMF sowed a seed of doubt on Monday by saying a pact to unfreeze Ukraine’s $5 billion aid program includes “focusing monetary policy on returning inflation to its target.” That goal stands at 5%.

All nine economists polled by Bloomberg, mostly before the Washington-based lender’s statement, predict the central bank will leave its benchmark at 8.5% on Thursday.

“Inflation slightly below forecast and a sluggish economic recovery are likely to see the key rate staying where it is,” said Mykhaylo Demkiv, an analyst at investment firm ICU in Kyiv. “But the wording of the IMF’s statement may be an argument for a stronger response to high inflation.”

Ukraine’s decision comes as soaring prices trigger tighter monetary policy across the region. Following other parts of the European Union’s eastern wing, Poland and Romania recently began raising rates. Russia is set for its sixth hike of the year on Friday.

The outlook for inflation in Ukraine will become clearer when the central bank releases updated forecasts alongside its rate decision. Countering price pressure is a rally in the hryvnia, the region’s best-performing currency this year.

But there’s more than just inflation at play. While the prospect of $700 million in IMF financing next month is encouraging for investors, the resurgent Covid-19 pandemic amid one of the continent’s lowest vaccination rates is imperiling the economy’s revival.