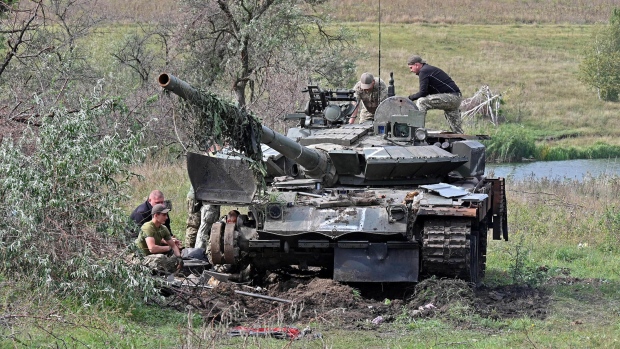 Ukrainian servicemen work on a tank abandoned by Russian troops during their retreat in the north of the Kharkiv region, on Sept. 20. Photographer: Sergey Bobok/AFP/Getty Images , Photographer: SERGEY BOBOK/AFP

(Bloomberg) -- Ukraine’s military has grabbed dozens of tanks left by fleeing Russian troops in the east, according to people familiar with the matter, adding crucial weaponry to its arsenal nearly seven months into a war where both sides have lost manpower and machinery.

One of the people put the number of tanks captured around 200, without specifying how many of those were operational or able to be repaired. At least some were destroyed. Another person said the cache included later design models such as T-80 tanks.

The haul -- a third person described it as a significant outcome -- is likely to ease some pressure on Ukraine’s forces as they head into a potentially difficult winter, when the terrain is set to become boggier and harder to navigate without tanks. At the same time, the government in Kyiv is set to keep up its calls for more weapons from the US and its European allies, and the Russian tanks will need to be supplemented with Western-produced equipment.

Ukraine says its forces have regained at least 6,000 square kilometers (2,316 square miles) of territory in a counteroffensive, mostly in the northeast of the country. The speed of the advance has seen Russian forces retreat into areas that Moscow and its proxies have controlled since 2014, even as they continue to occupy large parts of southern Ukraine where Kyiv’s progress has been more limited.

The struggles by Moscow’s troops on the ground have seen President Vladimir Putin escalate his efforts to regain some momentum. On Wednesday he announced a “partial mobilization,” drafting as many as 300,000 reservists to bolster his regular soldiers. He also renewed his warnings about the potential use of nuclear weapons as he seeks to absorb the Ukrainian territory that Russia controls through a series of sham “referendums” starting Friday on annexation.

Ukraine has so far received mostly Soviet-era tanks from a small number of allies, including Poland, and had been asking for more modern arsenals. Countries including the US and Germany have so far declined those requests. Under a swap deal announced this week, Slovenia will send 28 M-55S tanks to Ukraine and receive 40 military transport vehicles from Germany in exchange.

The US will help Ukraine make use of the captured assets, one person said, without giving specifics. America has supported other countries supplying Ukraine with Soviet-made tanks as well as providing parts for repair and maintenance, another person familiar with the matter said. A White House spokesperson declined to comment.

Military analysts have suggested that Kyiv has taken some of Russia’s most modern vehicles including the T-90. Open source investigators Oryx have calculated that more than 380 Russian tanks have fallen into Ukraine hands since the war began.

Mykhailo Podolyak, an adviser to the Ukrainian president’s chief of staff, declined to comment on the number of operable tanks captured. While the Kharkiv offensive brought many “trophies,” he said, “every case is unique: each needs to be examined, assessed in terms of condition and combativeness individually.”

But Podolyak was adamant the haul would have no impact on Ukraine’s need for more tanks from its allies. To bring the war to a swift end, “we absolutely need modern weapons, including tanks made in the US and Germany,” Podolyak said. “Soviet tanks produced between 50s and 80s won’t be competitive with Abrams and Leopards.”

“We cannot agree to a delayed war. Because it will be even hotter than the war now,” he said. “For us, this is a war for life. That is why we need defense support – weapons, military equipment and shells. Offensive weapons, a long-range one is enough to liberate our land, and defensive systems, above all, air defense.”

According to Igor Levchenko, head of strategic modeling at New Geopolitics, a Kyiv based think tank, Ukraine captured just under 100 Russian tanks that weren’t destroyed during the Kharkiv offensive. Few of those will be immediately battle ready, as the main reason to abandon tanks rather than use them to flee is they don’t start, although most will likely be easily fixed, he said.

Still, it isn’t enough to impact Ukraine’s urgent need for more tanks from other countries, most of which will likely need to come from the US, which has hundreds of Abrams main battle tanks in storage, according to Levchenko.

That’s because with close to 1 million personnel now under arms, Ukraine’s biggest problem is how to find enough tanks, armored personnel carriers and other vehicles to form them into units that can be sent into combat. “We now need hundreds more tanks and thousands of APCs,” said Levchenko. Both Ukraine and Russia have already scoured worldwide for available Soviet-designed versions.

The development is also likely to be a further hit to Russia’s supplies that have seen it dig deep into older stock, as its logistics have become increasingly targeted and strained.

(Updates with comments from Ukrainian president)