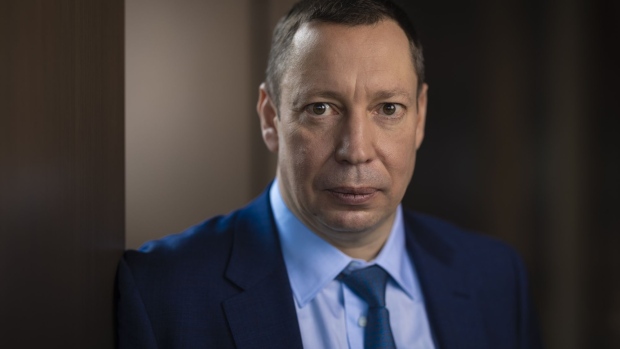 Kyrylo Shevchenko, governor of the National bank of Ukraine, following a Bloomberg Television interview in London, U.K., on Friday, Dec. 10, 2021. The central bank lifted its benchmark interest rate to 9% from 8.5% on Thursday -- as predicted by most economists surveyed by Bloomberg. , Bloomberg

(Bloomberg) -- Ukraine’s anti-corruption bureau said it sent a notice of suspicion in an embezzlement case to a suspect at the central bank, days after Governor Kyrylo Shevchenko tendered his resignation, citing his health.

While the authorities didn’t name Shevchenko specifically, they said in a statement the individual was a senior official involved in an alleged scheme to siphon 206 million hryvnia ($5.6 million) from state-run Ukrgazbank from November 2014 until March 2020. The details provided matched the central banker’s career history.

Shevchenko didn’t answer calls seeking comment, and neither did the central bank’s spokeswoman. Shevchenko submitted his resignation to President Volodymyr Zelenskiy on Tuesday, according to a statement posted on the central bank’s website. His departure is subject to approval by parliament in a vote expected later in the day.

Investigators said that ex-Ukrgazbank chief executive officer and his two deputies channeled money out of the bank via payments for services to “pseudo intermediaries” who brought big clients to the lender. The services existed only “on paper,” as clients deposited money in the bank on their own initiative or according to rules set up by the government for state companies, the investigators said.

The anti-corruption bureau said its suspicions were based on “questioning witnesses, searches, temporary access, information received from the bank’s clients, computers and checking mobile devices that included detailed emails between participants of the scheme and documents.”

The bureau said the whereabouts of the former CEO of Ukrgazbank is unknown, so it left the notice of suspicion at his office at the central bank.