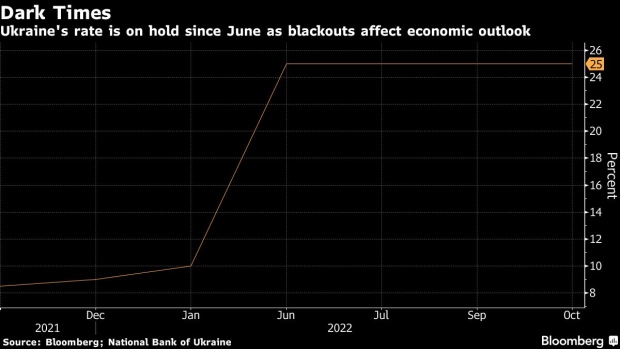 (Bloomberg) -- Ukraine’s central bank is likely to leave the cost of borrowing unchanged at the final monetary policy meeting this year even as a series of Russian missile attacks have imperiled forecasts for economic growth.

Policy makers have repeatedly said they won’t lower the key rate — currently at 25% — until 2024, though Governor Andriy Pyshnyi said last week that the bank would likely cut its economic outlook after Russia’s barrage of strikes against the country’s energy system. Officials will discuss the issue before the rate decision’s release on Thursday, with a new outlook expected to be published in January, he told Forbes.

The central bank’s current base-case scenario envisages 4% growth next year following a contraction of 31.5% in 2022. In the wake of Russia’s shelling of energy infrastructure and ensuing blackouts, Kyiv-based Dragon Capital said it now sees the country’s GDP shrinking by 32% this year and 5% in 2023.

The Finance Ministry expects a budget deficit seen at 34.4% of gross domestic product this year and 20.6% in 2023. Such figures represent “significant stimulus,” according to Mykhaylo Demkiv, an analyst at investment bank ICU.

“It does not look like the central bank might be up for an early rate cut considering the loose fiscal policy of the government,” he said from Kyiv.

The International Monetary Fund expects Ukraine’s economy to stabilize next year, forecasting growth at 1% under its baseline scenario with inflation remaining elevated at around 25%.