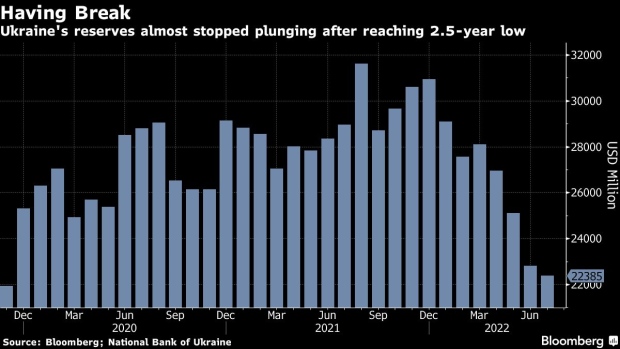 (Bloomberg) -- Ukraine’s currency reserves held steady last month, marking a halt to a plunge as the central bank devalued the hryvnia in an attempt to rescue an economy battered by Russia’s invasion.

The bank’s stockpile of foreign currencies and gold slipped 1.8% in July to $22.4 billion from a revised $22.8 billion, according to preliminary data released in Kyiv on Friday. The reserves had plunged by $5.7 billion -- as much as $2 billion a month -- since April as policy makers propped up government financing with heavy bond purchasing and market intervention to support the hryvnia.

Ukraine’s economy has buckled under Russia’s military attack, with the country’s main grain exports throttled and the government boosting military spending. That’s compounded a gaping budget deficit despite financial assistance from the US, Europe and international donors.

The July 21 devaluation, by about 25%, helped scale back the bank’s currency intervention, the central bank said in its statement. State-run lenders stepped in instead, selling large amounts of dollars and euros backed by some $2.7 billion in foreign grants Kyiv received in July.

In addition to the devaluation prompting more sales of foreign currency from exporters, the government also provided some relief by offering to delay sovereign and quasi-sovereign external debt payments to preserve cash reserves for military needs.

The resumption of some exports that began this week with the country’s first grain shipment since the war began may also bring relief with additional reserves.

“The current volume of international reserves ensures the financing of 3.5 months of future imports, which is sufficient for Ukraine to fulfill its obligations and for the government’s and the National Bank of Ukraine’s current operations,” the central bank said in a statement.

The central bank sees its reserves plunging below $21 billion at the end of 2022, which is the equivalent of 3.1 months of imports, according to a conversion ratio.