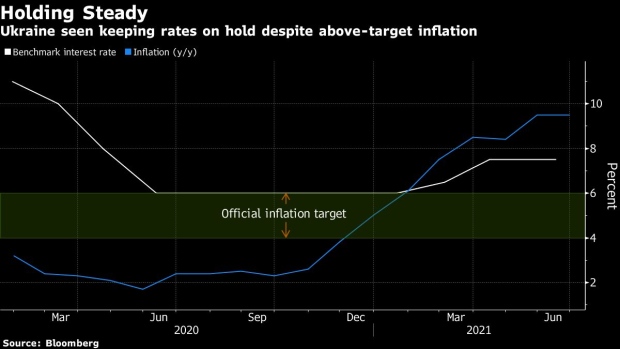 Ukraine is set to leave interest rates untouched for a second month after inflation stabilized, albeit at the highest level in Europe behind Turkey.

The eastern European country was quick to lift borrowing costs this year as consumer prices began to ramp up. But the central bank unexpectedly kept its benchmark flat in June as the spread of the Covid-19 delta variant stokes uncertainty about the economy’s post-lockdown recovery.

The key rate will be kept at 7.5% on Thursday, according to all but one analyst surveyed by Bloomberg. The other sees an increase to 8% in a move that, while unlikely, would reassure Western donors concerned that central bank independence is at risk from politicians demanding loose credit conditions.

The central bank stressed last month that it’s ready to raise rates if inflation expectations worsen. Three members of the 10-strong board unsuccessfully pushed for a hike, according to the minutes of the meeting.

Since then, data has shown inflation leveling off at 9.5%. But that’s some way above the full-year forecast of 8%, while there have also been personnel changes in the central bank’s upper ranks, with the arrival of Serhiy Nikolaychuk as deputy governor overseeing monetary policy.

The appointment of the respected economist and former central bank official is likely to please the International Monetary Fund, which has kept a $5 billion bailout loan to Ukraine on ice for months. The lender’s concerns range from the slow progress of anti-corruption efforts to governance at the bank, which has seen heavy staff turnover since Governor Kyrylo Shevchenko took charge last year.

While Shevchenko has defended the changes, he may yet be tempted to back higher rates to dispel concerns about his leadership.

“Inflation has stabilized but hasn’t eased,” said Konstantin Fastovets, an analyst at investment firm Adamant Capital in Kyiv and the only one polled who predicts a rate increase. “Recent resignations from the central bank damaged its reputation, and tightening borrowing costs may show it remains independent and professional.”